Taken In by Jane Toombs 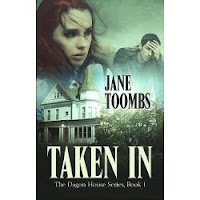 Gail Sarandon runs for her life after witnessing a murder. Found by Special Agent Jason Tregarth, the two are spotted by the murderer and pursued. After a car crash, Gail and Jason are taken in by the inhabitants of Dagon House who all have secrets of their own.

Dagon House itself hides its own terrible secrets. When the murderer finds Gail and Jason, it wakes the vengeful ghosts who are bent on revenge.

When Gail finds a note under her door from her ex-boyfriend, she doesn’t think things could get worse. She was very wrong.

Gail’s life quickly spirals out of control after finding the note. One minute she’s irritated that her ex is still trying to contact her, the next she’s witnessing his murder. Certain the killer saw her, Gail runs. It isn’t long before she’s intercepted by a federal agent determined to protect her. When an accident drives them to take shelter in a creepy old house with some very odd strangers, Jason and Gail are in more danger than ever. The killer is closing in on them, and it will only be a matter of time before he makes his move.

Gail and Jason made a cute couple. They didn’t exactly have a “love at first sight” connection, but there was still something sizzling beneath the surface when they connected. I think the relationship between Gail and Jason progressed a little too quickly and their “happily ever after” felt a bit forced considering they’d only known each other for a few days and hadn’t really had time to get to know each other on a personal level. A “happy for now” type of ending might have suited their situation better. Despite this issue, I sincerely like both characters and hope they have a great future.

The most intriguing part of Taken In is certainly the history of Dagon House and its ghosts. I think some of the past of the house was revealed a bit too directly. The story would have been even more thought provoking and chilling if the details concerning the ghosts and their deaths would have been revealed a bit more subtly. Despite this fact, I think there is still a lot more to be learned about Dagon House, and my interest is definitely piqued. When I finished reading the story, questions immediately began popping into my mind. Why had the former inhabitants of the house been murdered? Why do they still haunt the house? Do they remain in at the house because they want revenge or are they there for some other purpose? Also, Jason kept saying that the name of the house implied something evil, yet all the ghosts that showed themselves in this story were essentially good. Is there something more malevolent waiting to be revealed in future installments? I look forward to finding out.

In addition to wanting to know more about the ghosts, I would also like to find out more about the women currently living in the house, Anita and Krystal. Both women are running from violent pasts and their situations were far from resolved when the story ended. I couldn’t help but wonder if it was pure coincidence that two women with similar problems ended up renting the same house, or if something else was going on.

I’m glad I had the opportunity to read Taken In. It is a fast paced mystery with sinister undertones that can be enjoyed in one sitting. While the ending is certainly satisfying, Ms. Toombs has raised many tantalizing questions sure to have readers looking for the next book in the series.