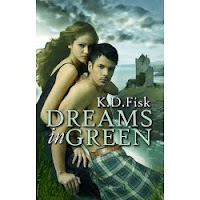 With the death of her father, Lenna Keith is trapped between a king’s command and a land hungry guardian. Her luck improves none as she flees and winds up at the mercy of the Gunns, the very clan seeking to destroy her family, but, looking into the eyes of their Laird, her heart rebels at the thought that this man is her adversary.

Alax Gunn is intrigued by this spirited woman but mostly by the fact that she mirrors someone who has haunted him since youth. Curiosity and mistrust turn to attraction and desire, but swiftly she becomes so more to him. What all will he sacrifice to keep Lenna safe and in his arms? Will a love between two destined enemies bring an end to a feud or to two ancient clans of Scotland?

Ghosts, grudges and greed have nineteen-year-old Lenna Keith’s life in upheaval and seriously threatened. She's the heir to Ackergill Castle that has belonged to the Keith clan for generations. She has ninety days to choose a husband from one of the feuding clans to help bring peace to the region or King James will choose one for her. In late sixteenth-century Scotland, her prospects did not bode well for a happy future.

With Ackergill taken over by Edward of the Sinclair clan, Lenna escapes after being abused. She runs to seek help only to fall into a poacher trap on land belonging to the hated Gunn clan. For over a century the Ackergill Keiths and the Halberry Gunns have been bitter enemies.

Alaxander Gunn, the new laird of Halberry, is a stranger to his own clan having been fostered at an early age and then sent on to King James’ court as a young man. When he rescues the wounded Lenna from the trap and takes her to Halberry to heal and rest, he sets of a storm of protest among his people. A hated Keith in their midst is abhorrent to them.

The old doctor Patrick stoically tends her. James, Alaxander’s cousin and second, is outright hostile and vocal. He rages until Alaxander say “No More….” Even Alax’s mother disapproves. Only the maid Moira seems happy to take care of the abused and wounded Lenna.

The ghost of the “Green Lady”, believed to be the spirit of the fifteenth-century Helen Gunn who died trying to escape the cruel abuse of a Keith, haunts Alax’s dreams and has for years, but now it seems more real and persistent telling him to not let tragedy take him and Lenna like it had taken her and her home. Her appearance to many influences actions that relate to Lenna and Alax’s well-being in a secretive and dangerous situation.

When Andrew of the MacKay clan abducts Lenna, the hopelessness she feels and her pain keeps the reader’s adrenaline pumping. Her courage and tenacity makes exciting reading. However, the entrance of a deranged, cruel priest puts Lenna’s life in peril and her pain is unrelenting. After all her valiant efforts, she feels death is imminent but refuses to give up.

A traitor in the Gunn clan, driven by deep-abiding hatred, has orchestrated the havoc in Lenna and Alax’s lives and deems both of them unfit to be at Halberry. I was so tempted to skip over to the back and see who it was. Even though the foreshadowing is there I missed it. As the suspense gets intense, the silent scream of, “Who is doing all these evil things?” prods one to read in a hurry.

The alliances change among the clans and the capricious ways of the king keep the reader on tenterhooks as the story builds to a climax.

Among all the misery and hate, which felt a little overdone, there are spots of humor that bring a bit of relief. One of the best is Alax and Lenna’s ride home after he rescues her and gives her whiskey to ease her pain. She becomes “pure seduction”. Even Moira giggles at her as she gets the inebriated Lenna settled in bed knowing a deluxe hangover awaits Lenna the next morning. Of course, the love scenes bring out the best of the characters and all the misery dims as Alax and Lenna, against tremendous odds, find acceptance and their happy-ever-after. I stayed up late to finish this one.