The Shoppe of Spells: The Gatekeepers Book One by Shanon Grey 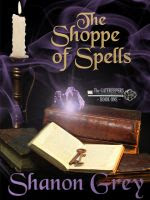 When is a whole more than the sum of its parts?

When it has ties to the quaint little town of Ruthorford, GA, as Morgan Briscoe discovers when a cryptic message threatens to change her life forever.

Morgan’s relatively normal life is turned on its ear when she learns not only that she is adopted, but her birth parents are dead and she now holds half-interest in a business with their ward, Dorian Drake. Dorian is running The Shoppe of Spells and despite his riveting good looks, he can barely conceal his hostility toward his new partner.

Morgan discovers that she is more than she seems and together she and Dorian have the ability to control a portal to another dimension.

Unable to control their growing attraction, Morgan and Dorian dance around their desires and her burgeoning abilities, until danger forces them to face their destiny.

Morgan grew up with loving parents and knew they would always be there for her. She now has her own apartment and lives there with her cat Mrs T. Her problem is how to tell her parents she has lost her job and has also broken up with her boyfriend. Her life changes dramatically when a courier knocks on her door with a letter asking her to call a firm of solicitors.

Horror, anger and confusion overcome her as she learns her parents adopted her when she was six weeks old. A visit to the solicitors brings more confusion. She learns her real parents have died. After they gave her up for adoption they took in a young boy and brought him up as their own. She struggles to understand why they would give away their own baby and take in another child.

When she meets Dorian and enters The Shoppe of Spells in Ruthorford she steps into a completely different world from the one she grew up in. Ruthorford takes her into its warm embrace. She finds her strange emerald green eyes which have always embarrassed her are accepted as normal by the inhabitants of the small town. The nightmares she has experienced intermittently since she was a child return to haunt her, but now they are more substantial. Dorian attracts her in more than a lustful way, their interactions seem to bring about an electrical connectivity.

Morgan must learn about the past, and choose her future. Dorian’s task is to help her understand what is required of her, and smooth her path to using her talents. Only Dorian knows how disastrous it will be if they give in to their longing for each before Morgan truly understands the situation.

This book drew me in from the beginning. I felt comfortable and relaxed as I read page after page. I empathized with both Morgan and Dorian and the history behind the characters unfolded as the book evolved. Everything I needed for a great read was presented to me. The good, the bad and the mysterious. Food sounded comforting and appetizing, but it blended into the scene and was not presented as a bare description. Love scenes came naturally. Magic and fantasy which had me looking over my shoulder to see if the purple people were behind me. All these things made me forget where I actually was. Instead I went with Morgan as she discovered her unknown past, and sympathized with Dorian as he tried to come to terms with this beautiful woman who had erupted into his life.

I would have read The Shoppe of Spells in one go but life intervened and forced me to break my reading time into three. The last time I refused to put the book down until I’d finished it. It’s rare to find a well written story that is also well edited and with a gorgeous cover. The author did the hard work but has been ably assisted by the publishers representatives. And better still this is the first of a series! Well done Ms Grey. I look forward to the next book in The Gatekeepers series.

Posted by The Long and the Short of It Admin at 4:25 AM