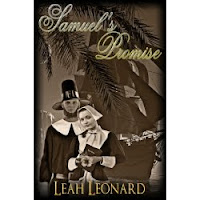 Set in the late 1800s, Samuel’s Promise describes the love story of Samuel and Nancy Ruggles who were forced together by faith and the desire to serve God overseas in Hawaii. Samuel’s friend Henry Opukaha’ia, a native Hawaiian, dies before he can lead the missionaries to his homeland, Samuel promises him on his deathbed he will indeed return to Hawaii to fulfill his friend’s dying wish. Samuel has one problem—he’s not married and the company will only accept couples to the group. Nancy Wells works in the office of the Foreign Mission School and she too believes God is calling her to serve overseas, but after her true love was killed years earlier, Nancy closed her heart to everyone but God, and learns she too must find a husband quickly if her dream is to become reality.

Nancy is stuck in the past. For the last ten years, she's mourned her dead love, Thomas, and refused to move on. Now God's going to give her a kick in the rear, throwing her in the path of Samuel Ruggles. Both are unmarried, both feel the call as missionaries, and both will need to marry someone by the end of the week if they want to go on the mission trip to the Sandwich Islands.

Both Nancy and Samuel are well portrayed. I felt Nancy's humiliation when she overhears a conversation between Samuel and Lucy Thurston, who, with her husband, runs a mission school. Samuel puts his foot right in his mouth, telling Mrs. Thurston he's not interested in marrying Nancy, even to secure a place with the mission.

Poor Nancy. Every time the author described Nancy's stringy brown hair, I wanted to haul her off to CVS and buy her a large bottle of volumizing shampoo. But, alas, no CVS in the late 1800's, and, after a little prompting from God in the form of a dream about the two of them, Samuel decides Nancy is the woman for him. Yes, I did enjoy seeing Samuel squirm as he tries to convince Nancy he really does want to marry her.

This is at bottom a straightforward story of the beginning of a marriage and a sea voyage, without many twists and turns. In spite of this, the author managed to hold my interest throughout. I worried, reading about poor Samuel's chest congestion, that he had consumption – in which case his goose would have been cooked – but, fortunately, it turned out to be what I'm guessing was a bad case of pneumonia (the author never specifies), and Nancy spends most of the sea voyage nursing Samuel back to health.

I did find the missionary aspects of this novel disturbing, as I believe very strongly in not imposing my own cultural prejudices on others, and that is exactly what I see the missionaries do with the islanders when they make them clothing. However, putting aside my disparaging views of missionaries in general, in this case the author has done a good job in showing that the islanders, or specifically Hewahewa, are looking to be saved.

I was not, I admit, paying attention in Social Studies, and thus the information that the author manages to drop into the novel about the Sandwich Islanders and the visions of their spiritual leader, Hewahewa interesting enough to encourage me to look for a book about the history of the islands. There's just enough here to move the novel forward and tantalize the reader. Library, here I come.

If you like historical romance and want a satisfying, inspirational story, don't miss this well written, well plotted novel. You won't be disappointed.