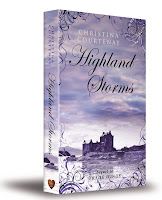 Who can you trust?

Betrayed by his brother and his childhood love, Brice Kinross needs a fresh start. So he welcomes the opportunity to leave Sweden for the Scottish Highlands to take over the family estate.

But there’s trouble afoot at Rosyth in 1754 and Brice finds himself unwelcome. The estate’s in ruin and money is disappearing. He discovers an ally in Marsaili Buchanan, the beautiful redheaded housekeeper, but can he trust her?

Marsaili is determined to build a good life. She works hard at being housekeeper and harder still at avoiding men who want to take advantage of her. But she’s irresistibly drawn to the new clan chief, even though he’s made it plain he doesn’t want to be shackled to anyone.

And the young laird has more than romance on his mind. His investigations are stirring up an enemy. Someone who will stop at nothing to get what he wants – including Marsaili – even if that means destroying Brice’s life forever …

In mid-eighteenth-century Scotland, the people still suffer under an oppressive rule of England. When Brice Kinross arrives from Sweden to take charge of his property, Rosyth House, he sees a big change since his childhood years when he spent much time at the then-prosperous estate.

Brice Kinross, seasoned and rich from years in the China Trade, arrives from Sweden with a broken heart or, more appropriately, a bitter heart. The girl he’d planned to marry married his brother.

Marsaili Buchanan, an illegitimate daughter of Ailsa Kinross’s dead husband, is the capable housekeeper at Rosyth. She struggles to keep the household functioning on the meager resources the factor Colin Seton allows her to use. She also struggles to keep men at bay, the most persistent of them being Colin Seton who seems to be obsessed with her.

Ailsa, Kristy, and Flora Kinross, while belonging to the owner family, have no true influence over what goes on at Rosyth House even though they live there. Colin Seton intimidates the sickly Ailsa who has no ability or inclination to see that the estate is properly managed. Seton has ruled Rosyth House for over a decade--looking out for his own interests at the expense of the estate that he has been entrusted with.

When Brice shows up incognito, he sees many discrepancies in information sent to his father about the estate and what is actually going on. He does some secret reconnoitering while there as a stranger so when he returns as the true owner, he is on alert. Liath, Marsaili’s deer hound, little Archie who knows much about what goes on, and a few of the people who remember Brice from his childhood days at Rosyth prove to be invaluable to Brice as conflicts boil up. Also, Brice’s knowledge about crops, stock, and the secret passageways in the house serve him well,

Seton sees his plan to continue using Rosyth House funds to buy his family’s old estate back becoming impossible unless he gets rid of the “meddling” owner. He ruthlessly uses his power over the people at Rosyth House, his connection with the deranged English Captain Sherringham who still hunts suspected Jacobites, and the outlaw MacGregors to do away with Brice and to force Marsaili to yield to his demands

Upon the arrival of Brice’s friends, Ramsey and Alex, new facets of the story begin to unfold—in romance and in life-threatening conflicts. The action picks up to a fever pace, while the undeclared love Brice and Marsaili have for each other becomes a mighty force in the plot and also becomes the balm that heals old wounds, reaffirms self-worth, dispels doubts, and gives them courage to acknowledge their love and find their happy-ever-after.

Christine Courtenay sweeps the reader into the story with tense moments for Marsaili then weaves a plot that looks like an impossible tangle of events and emotional hang-ups.. Her amazing untangling of it all, so that good wins over evil and the hero and heroine realize their true love holds the reader’s attention from start to finish.

Posted by The Long and the Short of It Admin at 4:30 AM