The Dead Speak by Mary Suzanne 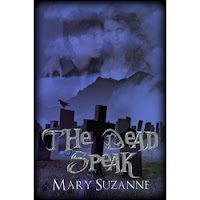 The dead tell no tales.

EVT/IT was something Riley discovered at the local law firm where he works as a paralegal by listening in on one of the customer’s graphic description of how he practiced Electronic Voice Phenomena and Instrumental Trans Communication. The phenomenon of recording messages by placing a digital recorder on the slabs at the cemetery intrigued Riley so he had to try it for himself. Once he begins, the practice takes over his life. Will Riley receive any messages from the other side? If so, how will he deal with his unearthly find?

It starts in a cemetery... so we know something creepy is going to happen. Riley Yates has a normal job and is engaged to a normal woman, Melissa, but he has an interest in the paranormal. With an interest in EVP, he's at the cemetery hoping to capture the voices of the deceased on tape.

Right from the start, suspense is created. Will he be successful? Will he make contact with those who have passed on? He does. A man who died in the Old West gets Riley started on the path to find a hidden treasure on the other side of the country.

Riley gets riled up. He gives up his job and tells Melissa he's going to go find that treasure. She thinks he's crazy. They break up. So Riley gives up his job and his fiancée quite easily and isn't heart-broken about it. Obviously, their relationship isn't very good in the first place. Things get tense for the reader. Will he find his treasure, or will he find that he gave up his old life for nothing? At any rate, his life will change.

It's an intriguing plot, but the writing is at times distant and vague. Also, for a short story, it is often wordy. The Dead Speak is not a romance per se but will be of interest to those looking for a short paranormal filled with suspense. Riley is an interesting character and does some good things at the end of the story and he meets someone new. This tale is a good, quick little read.