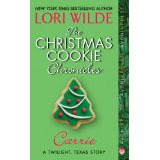 Come join a meeting of the First Love Cookie Club!

“On Christmas Eve, if you sleep with kismet cookies under your pillow and dream of your own true love, he will be your destiny.”

Carrie MacGregor doesn’t believe this—not one bit. She might be a “paid up” member of the Cookie Club and the local Sweethearts Knitting Club, but she’s not about to give in to the forced ho-ho-ho of the season. And why? Mark Leland. When he left town he broke Carrie’s heart. Now, the local-guy-made good is back, hosting the reality show “Fact or Fantasy.”

Fact: Mark broke her heart. Fantasy: her friends think they’ll be getting back together. But could the magic of a Twilight, Texas Christmas make Carrie’s secret dreams come true?

Return to Twilight, Texas where high school sweethearts find their happily ever after. Twilight’s legend continues and brings two more sweethearts together over the holidays.

Carrie MacGregor hates Christmas; she is Scrooge and the Grinch rolled up into one. Christmas represents lost love, dashed hopes and a broken heart to Carrie, her mother passed away five Christmases ago from ALS and eight years ago Carrie’s high school sweetheart and husband of two days walked away from her during the holidays. Carrie’s mantra to get through this year’s holidays is no fuss, no tears, no drama and no memories, and then she is told that her lost love, Mark Leland, is finally returning to Twilight and Carrie knows her mantra isn’t going to be enough to get through this holiday season.

Mark Leland left Twilight eight years ago leaving behind his high school sweetheart and wife of two days to go off to college and never looked back. Mark has changed considerably over the last eight years, he has gone from the provincial farm kid from Twilight to Los Angeles’ next up and coming reality television show host. When Mark arrives back in Twilight, he is instantly reminded of what he left behind or, more accurately, who he left behind: Carrie MacGregor, the only woman he has ever loved and he can’t help but think maybe he should have tried harder to keep her eight years ago.

Ms. Wilde’s The Christmas Cookie Chronicles: Carrie, is a heartwarming holiday read injected with Wilde’s distinctive humor and loaded with genuine emotion. Like Ms. Wilde’s other Twilight stories, she continues to take her readers on an emotional journey with both of her main characters who struggle with their feelings of lost love and how they rekindle the magic between them. I really liked Carrie in this story because, even though she puts up a tough front, I saw her as loving individual who sacrificed her own feelings in order to protect those people who were important to her. Mark, the hero of this tale, is one of those guys that you can’t help but fall a little in love with, even though he has made some dumb choices over the years, you know he truly loves Carrie and he has finally grown up and figured it out.

Ms. Wilde’s writing is superb. Considering the length of this novella, she managed to tell a wonderful love story and was able to bring back some of the hilarious characters from previous Twilight series. The plot was well laid out and kept me turning the pages to find out what would happen next. Both the heroine and hero were well developed characters with great chemistry. Wilde’s dialogue as always was believable, humorous and emotional. The absolute best part of this story was the ending, so very romantic and touching that it brought a tear to my eye.

Pick up the perfect holiday read, Lori Wilde’s The Christmas Cookies Chronicles: Carrie, and curl up in front of the fireplace with some hot cocoa and spend an afternoon in Twilight, you’ll be glad you did! For those of you who have never read one of Lori Wilde’s books from her Twilight, Texas series you are in for a treat, if you have, this fun holiday read will reacquaint you with some old characters and introduce you to a few new ones you will fall in love with.