To Wed a Wild Lord by Sabrina Jeffries 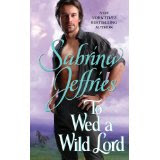 Drowning in guilt over his best friend's death seven years ago, Lord Gabriel Sharpe, the Angel of Death, knows his only hope at redemption is a race against a shocking opponent.

Shrouded in darkness for the past seven years, the infamous racer Lord Gabriel Sharpe is known to accept every challenge to race thrown at him. When his next challenge comes in the form of his late best friend's sister, Virginia Waverly, Gabe is shocked. Yet she presents just the opportunity Gabe needs--marriage to fulfill his grandmother's ultimatum and ensure his inheritance. What he didn't count on was needing her love.

And the mystery deepens as another Sharpe has fallen onto the rocky and exciting path of love. Ms. Jeffries once again has entertained and amazed with a romance that seemed doomed from the start only to reveal to readers how perfect and wonderful Virginia Waverly is for Lord Gabriel Sharpe. What a ride!

Anyone who has been following the series will be intrigued by the hints and hazy clues revealed in the beginning of the book. It touches on the overall story arc that is being woven through all of the standalone books in the series. To Wed a Wild Lord is definitely a book that a new reader can get into without fear of feeling lost or uninformed. Everything needed to understand both the underlying mystery and the current turbulent relationship between Gabriel and Virginia is well presented in a natural manner, as though hearing about it for the first time. Yet there is enough there to whet a reader’s appetite to perhaps go back and read the ones that came before. It’s worth it.

In this installment, I got to know what makes Virginia tick and that she’s not so adverse to Gabriel’s attentions, in spite of all the naysayers. I enjoyed how she got carried away with passion and had to face some truths about herself and her motivations.

Gabriel is known as the Angel of Death. It’s a cover that he hides behind but it’s not until he becomes truly serious about Virginia that he figures out what he’s been doing and running from all these years. The journey to when he gets to that part is at times nerve wracking, humorous, sentimental and frustrating. He’s a very conflicted man … until he finally realizes what is important in life. It’s at that point when things get really interesting – when Gabriel faces the greatest challenge of his life – to win Virginia’s love.

The biggest roadblock to the protagonists happy ever after isn’t so much their own internal conflicts, but the web of lies and assumptions that rise up from the past to deal hefty emotional blows. Jealousy and spite from others try to poison their happiness from the beginning, but it turns out that Virginia isn’t a weak minded woman nor is Gabriel that far gone in his quest to run from his demons. They eventually find the strength they need to persevere in each other and together, solve and put to rest something that has haunted both their lives for years. It’s tragic and heartfelt, but healing too.

Secondary characters abound to help keep the plot moving and the hero and heroine motivated. My favorite is Gabriel’s manipulative grandmother, Hetty. There’s a little letter from her in the beginning of the book. After I was done reading, I went back and re-read it -- and laughed. There was a hint in there about a possible love interest that was so subtle I missed it. I found it endearing when I realized just whom it might be about. And I know I’m going to enjoy seeing what Ms. Jefferies is going to do about that. Other characters are not so sanguine and brought about some light but effective drama.

The happy ever after is sweet and so satisfying. To Wed a Wild Lord is sheer delight and a romance that hits all the high notes to perfection. It was riveting to the point that I read it in one sitting – a true page turner. Why? Because I so enjoyed Gabriel and Virginia falling in love and the author kept me guessing as to what it was going to take to make the hero see the light – the light of his life. The story embraces romance at its best and was a treat to read. Pick up a copy and see for yourself.