The Pirate and the Professor by Michelle Levigne 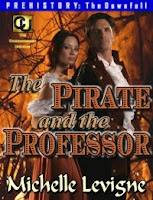 As civilization crumbles, Kiryn realizes the only way to protect her planet from pirates is to become one. She takes up the mantle of her father, a reformed pirate who saved his homeworld.

As captain of the legendary pirate ship, Nova Vendetta, she makes her homeworld a haven for the downtrodden. Then the scholarly representative of a neglected colony comes as a peace envoy and makes her think of more than just surviving. When the two of them are shot down in the badlands of her planet, they become partners to survive, then friends, then maybe something more.

Kiryn trusts no one except her crew and with good reason. Her parents were shot out of the sky while on an ambassador mission. They trusted and now they are dead…

Ms. Levigne does an excellent job of creating a fantasy world that has harsh and unrelenting weather and is full of dangerous animals and plants. She adds enough description to make it seem real. That makes the story much more realistic, even if it is a fantasy.

Kiryn blockades her planet to keep it safe. No one passes the blockade without her approval, which is very hard to get. When a ship arrives with another ambassador on it, she has her doubts about his authenticity and his purpose. However, he has a sharp mind and can bring her a new prospective; she wants someone to talk over strategies with.

The author makes her female character tough and her personality strong. I like that a lot. Darrak is brainy and good looking, but has no real physical strength. He gets his nickname “The Professor” from all the books he reads (I can relate to that!).

It’s fun to watch the two characters dance around each other. She’s not sure she should trust him. He’s attracted to her and hopes for more than a working relationship. And while they are still deciding how to act, their shuttle gets shot down and they end up in a river. She can’t swim; he can. And it’s his book knowledge that keeps them warm and fed while they try to get back to the station.

The story has a nice flow, the author adds plenty of action and danger to it, and the two main characters complement each other well. I really enjoyed reading this one. Why don’t you go take a romp in space and have fun meeting Kiryn and Darrak? If you enjoy fantasy novellas, this is a good one.

Posted by The Long and the Short of It Admin at 4:31 AM