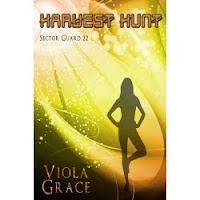 Ashlin wants to save the beast marked for the hunt, but when intelligence sparks in his eyes, the idea becomes the gateway to a new life.

Ashlin has spent her life trying to move beyond her status as a throwback. Unlike all of the population around her, she has to fight for respect on a daily basis. When being Hunt Master is taken from her once again, she resolves to avoid the hunt, but looking into the eyes of the beast to be hunted, she knows she cannot ignore the intelligence in those silver eyes. Leaving her home before dawn, she waits for the beast to catch up to her and manages to help him transform back into Rumble of the Sector Guard. In that moment her fate is sealed and her life in the stars begins.

Viola Grace has once again created a new and unusual blended species in this, the twenty-second book of the Sector Guard series.

As the best hunter on Endin, Ashlin Offrey should be the one chosen to lead the ritual Harvest Hunt. But Ashlin knows she will never be awarded that honor, because not only is she a female, she is also ‘different’ from the rest of the Endin race. As a mixed race being, she has several hidden talents: hidden by choice from all those who already think of her as a freak.

When she looks into the eyes of the beast chosen for the hunt, she realizes something the others don’t; that there is an intelligent being trapped in the body of the beast, and she is determined that he will not be destroyed. What she doesn’t know is that he is Rumble, a member of the elite Sector Guard, and he allowed his entrapment and capture to recruit Ashlin to the Guard. When Ashlin is injured during their escape attempt, Ecros, or Rumble, does his best to keep her alive until they reach the base.

As Ashlin’s body heals, she also begins to change and develop another form. Can she come to terms with this new body, so different from anything seen before? Can Ashlin accept Ecros as not only her Sector Guard partner, but as her mate as well? What does her new talent mean for her future in the Guard?

Just when I think I’ve read it all, Ms. Grace provides me with a new and delightful character with whom to become acquainted. I continue to enjoy the new and varied worlds of the Sector Guard and the unique and engaging people that inhabit these worlds.

Ashlin Offrey, or Hunter, is a strong, intelligent and determined young woman. She realizes that her mixed bloodlines make her different from the small, gray skinned Endin people she has lived with her whole life. As an Endin/Wyoran blend, she has the look of her more feline ancestors, and the talents inherent in their species. I enjoyed watching as she outsmarted the Endin hunters to rescue Ecros (Rumble) and free him from his lion form. It was wonderful to see her become more than just another hunter, and I was pleased to she how she delighted in her acceptance and curiosity about her new form.

Ecros, or Rumble, is a strong and attractive Kalordan male, and he is determined to win the affection of Ashlin. I was shocked to realize that he had himself deliberately forced into his lion so that he could observe Ashlin and her talent, even though he was in danger during the whole episode. I loved the interaction between these two, and I was glad that he was willing to wait after stating his intentions, not forcing the issue.

This is filled with humor, and some sarcastic and witty repartee between the two main characters. When Ashlin develops a whole new form, she handles it well. I loved the irony that the first assignment that this team draws is to return to Endin and rescue a lost hunting party, and the secrets and betrayals that are revealed there were very much a surprise I didn’t see coming. There is also a visit with some characters from past stories and I enjoyed catching up. This has a most satisfying happy ever after for these two, but only after a grand adventure through the stars.

Posted by The Long and the Short of It Admin at 4:35 AM