Queen of the Sylphs by L. J. McDonald 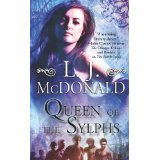 It was a dream come true. Solie had her own battler, a creature of almost infinite magic who could vaporize legions in the blink of an eye and would willingly suffer a thousand bloody deaths to protect her. She was his love. More simply, she was his queen.

Many others feel the same. The new-built settlement is a haven for all. Erected by sylphs of earth and fire, air and water, the Valley is Solie’s dominion. But, lovers without peer or killers without mercy, the very nature of their battler protectors means peril. It is not in any sylph’s nature to disobey, and while some are hers to command, others are the slaves of Solie’s enemies—the jealous, the cruel. Those who guard her must not fail. Their peasant-born ruler is not yet safe as…QUEEN OF THE SYLPHS

This book made me angry, and I wanted to screech and stomp my feet and battle someone, anyone just so I wouldn’t feel so helpless anymore. I have never gotten so hyper from a book that I couldn’t sit still, I couldn’t stop thinking about it and I even smacked the top of my desk, hurting my hand, when a very unexpected and horrid thing happened that totally shocked me. I screamed, NO!!!” This is not an easy story to read, it cannot leave a reader unaffected and it most certainly is so well crafted that it drags emotions out from the dark and makes a person pay attention.

Right up front, I’m saying this is not a standalone read. No way. What happens in this story to some of the protagonists will only make you sweat and tremble in fear if you’ve gotten to know the characters from the first two books like I did. I care about them, I am amazed by them and they’ve been through so much. For what happens to them in this book I simply say, NOT FAIR!

For all of my railing and ranting, the only reason that the Queen of the Sylphs made me react so strongly was because of the pure genius of the writing. L. J. McDonald has crafted a world that is both breathtaking in its beauty and horrifying because of the harsh realities of their world. The rules are different than anything I’ve ever come across and the dynamics and structure of the society is complicated, intricate and truly unique. It’s absolutely fascinating. And for all its differences, the thirst for power and the corruption of the mind in pursuit of it remains the same. That’s the major conflict. Someone is out to grab the riches that Queen Solie and her cabinet have forged out of a desolate land. How it came to be is amazing in and of itself and those readers who have read the previous tales know well of what I speak of. That is why this book has the power to horrify and to make a reader weep. For every power play, innocents pay the price, sometimes, with their very lives.

The evil and twisted villain in this piece was easy for me to figure out. But that’s all. Everything that came later was like a bombardment, shock after shock. There was one scene with Wat and Claw that almost made me puke. I was so astonishingly and negatively affected that I had to write a friend of mine who also likes books just so I could have some venting therapy. Why did it affect me so? Because I like Wat and I have always been worried for Claw. Again, readers know how tortured his character is, so for the author to have done what she did, it totally floored me. I repeat that this story would, in no way, have dragged such emotional extremes from me if the writing wasn’t as good as it is. If the author hadn’t been effective in making a connection between the reader and her characters, then I wouldn’t have felt much, most assuredly not this passion that tortures me.

For the squeamish and sensitive reader, be warned that the setup of this society can lend itself to the flourishing of abuse and misuse of power. In fact, for one scene I would term it rape. I know that they are actually aliens, but they take human form, they have female and male genders, so as far as I’m concerned they have the same rights and expectations of common decency and consideration that are awarded sentient beings. The villain doesn’t see them that way and affords them no peace. The author created a truly vile and sinister piece of human excrement. Another interesting tidbit is that the evil one is an exercise in irony. Readers of the series should be able to pick up on that.

I hope my review doesn’t scare reviewers about the intensity of the story. It’s really amazing and well done. There is hope. There is justice. In fact, I nearly shot out of my chair with feelings of vindication and triumph. I even did a fist pump in the air. Solie truly earns her title of queen. Overall, I think I fired eight emails at my friend for every time something momentous happened. I was a little nuts but I couldn’t contain myself. This book had my emotions on a roller coaster and I practically slumped in relief when the very exciting, climactic and thunderous confrontation came to a satisfying conclusion.

Speaking of which, will you think less of me if I say the ending made me cry? It was beautiful, passionate and sentimental. It was true to the story; it was emotionally powerful and humbling and it made everything that went on before have meaning and relevance. If I could, I would have wanted to give them all a group hug, but I bet one of the battlers would have growled at me.

There is so much to talk about that happens in this story but I can’t for fear of spoilers. I can’t even list my favorite people because then readers of the story might wonder about the names I’m not saying. I can’t give anything away. I refuse to dilute the sheer power and enormity of events that transpire during the course of the tale. I can say there is betrayal beyond belief, heartbreak and action. There is a mystery that only a reader knows the answer to but the frustration is there because no one can shout the answer to the characters to save them from what has to happen. Be assured there is retribution. Bless my bloodthirsty little heart.

Queen of the Sylphs deserves any and all accolades for being a high-powered thrill ride that leaves a reader breathless. The writing and editing are superb, the characters top-notch and the world building like nothing readers have seen before. I adore Solie and Heyou and wish for them a beautiful future with less stress. Because Ms. McDonald has proven herself an author that delivers unexpected and devious twists and isn’t afraid to make hard choices for the characters she’s created, I’d say that the hero and heroine have a happy for now ending. There has to be more stories to be told and more adventures to be had because there is no way a world this rich, this incredibly vibrant and totally unique could end with only three tales. Queen of the Sylphs whet my appetite for more books in the series and they can't be published quickly enough.