Assumption of Right by Annabel Aidan 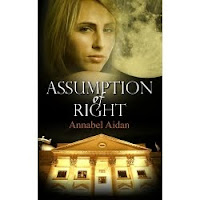 Witch and theatre professional Morag D’Anneville is annoyed when she’s assigned to dress the conservative Vice President as he makes a surprise appearance in his favorite Broadway show. Even more irritating, she has to teach Agent Simon Keane, part of the security detail, the backstage ropes in preparation. A strong attraction flares between them which they both recognize is doomed, and Simon must also fight his superior’s prejudice that Morag’s beliefs make her a threat to the Vice President. When Morag is attacked, Simon’s loyalties are torn between protecting the man he’s sworn to protect, and protecting the woman he loves.

Morag has a fun and interesting job: she works for the theatre. She gets to be part of the production by dressing the stars. When a very important person, oh say, the Vice President of the United States wants to fulfill his dream by being in the production for one night, Morag is slightly less than thrilled.

Morag is a different character than many heroines. She's a Wiccan, and she's not afraid to show it. She's honest, doesn't keep her feelings back. I liked her instantly, even before she let her guard down. Then there's the hero, Simon. He's part of the Secret Service, there to keep and eye out on the Vice President. And of course, Simon and Morag don't hit it off immediately, but as an attacker surfaces, he's there not only to protect the vice president, he's now protecting Morag. And his feelings are more than just friendly.

Assumption of Right is a thrill ride. I loved the idea that the career of the heroine centered around the theater. I am always interested in a story with that kind of plot in it. The tension is high, the characters are believable and memorable. All around this is quite an enjoyable story. Ms. Aidan takes the reader on an adventure they soon won't forgot.

If you enjoy romantic suspense, the theater, and a story that will pull you in and won't let go until the last page has been turned, then Assumption of Right is a book not to be missed. Why not add this to your reading list?

Posted by The Long and the Short of It Admin at 4:20 AM