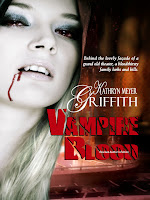 For years the vampire family lived in the shadows, hidden by the night and people’s disbelief; feeding on animals or throw away people who would never be missed. As the family moves into an old theater to cover up their crimes, the youngest are restless and determined to live as they like. Killing and feeding when and where they want. Feeding on who they want. Only the oldest vampires have managed to keep them in check. But no longer.

Unaware of the nightstalking menace, the townspeople of Summer Haven, Florida, blithely go about their daily lives until, one by one, they disappear. Screams are heard in the night. Fear grows. But the lost are never found…alive.

Jenny Lacey and her father, who are hired to renovate the old Grand Theater, can’t escape when they find themselves caught up in the middle of the vampire’s war. In the end, it’s up to Jenny, her brother and her ex-husband to get rid of the bloodthirsty fiends that are destroying their town…if they can.

Creepy. Chilling. Both words that could be used to describe this book. Triumph, love and hope could also be used. This is a classic vampire novel of good versus evil. It almost feels like a throwback to a past era, to a time when it was more clear who the bad guys were.

We immediately get to know the character of Jenny and her family. I felt like they could have been one of several families that I know. Just down to earth, good people struggling to get by and dealing with the realistic daily life that so many people struggle with. Jenny worries about her dad getting older and still needing to work. She loves her brother and is proud of his accomplishments of realizing his dreams. She misses her daughter, who lives far away. She regrets relationships of the past and decisions that she has made. In short, she is just like you, me or any number of people that you may know.

The characters that we get to know through this story are realistic and dynamic. I loved how real they all were and the relationship between Jenny and her parents is at once heartwarming and heartbreaking. The vampire characters are more in the fashion of the old, scary vampires of past generations rather than the sexy, enticing vampires of today's romance novels. The exceptions to that statement would be the two “parent” vampires, Terry and Annie. We do get to know a little of their history, but really just enough to tease. We don't get to know any of the vampire Irene's history at all, other than one brief statement, and given her role in the book it would have been nice to learn more of her background. The stars of this novel are not the vampires though, despite what it would seem from the title, and as a result we don't get to know them nearly as well as the rest of the people in the book.

The love story between Jenny, and her ex-husband Jeff, is somewhat bittersweet. Jeff is a likable guy and, I realize that there are extreme circumstances at work, but I don't know that I would have forgiven him quite so easily. There is romance in the book in the form of other relationships that we get glimpses of, but relationship between Jenny and Jeff is the main romantic storyline – and it is minimal. One thing still holds true to the romance genre though: we do get our happy ending.

It is well written, with a realistic feel to it. If vampires did exist in our world, it is easy to see something like the story portrayed in this novel taking place.

If you like dark tales with classic “monsters” and a story of determination to overcome then you should check out this book. If you are anything like me, it will keep you turning the pages long into the night. I do love a good horror novel once in a while and with some romance thrown and paranormal aspects, this is like the best of all worlds. Reading it around Halloween would be fun!