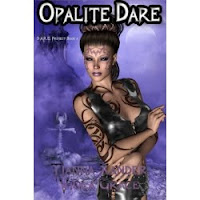 Opalite has struggled to keep her self-contained while she travels and retrieves lost humans. Meeting up with a shackled dragon male has upset her attempts to keep her life under her control. When her association with him gets the attention of her handlers, the humans charge her with manhandling one of their own. Defending herself would be hard enough with one witness on her side, but alone against the humans, what chance does a dragon swan have?

The D.A.R.E. Project series is a delightfully sweet and lightly sensuous series, with magic and dragons, and women working to save the world.

The D.A.R.E. Project was a wonderful idea, but the cost became too much to consider. When the people on Earth captured Eiwyn, a dragon swan pregnant with four daughters, they take the four embryos and split each into five females. Opalite has been doing retrievals for a while now, but on one of her recent missions, she finds a group of humans being held against their will.

After making sure they all get through the portal to safety on Earth, she finds a man chained to a wall, tortured and semi-conscious. After freeing him, he tells her he is Kros, a dragon. He takes her away and tries to convince her to be his mate. He also tells her that her three missing sisters are alive and well.

When Opalite returns to the lab, she is sent on another retrieval, and although it goes well, she is accused of imprisoning and torturing the man she rescued. Can Opalite clear her name of the false charges? Will she ever have the freedom she so desperately wants? Will Kros find her and help her reunite with her sisters?

I like this world created in the minds of Tianna Xander and Viola Grace, and the characters are all unique and well crafted. These are all softly romantic and yet there is just enough spice to intrigue the senses.

Opalite is strong and smart, and longs to be free: free to walk in the sun, and be just who she is. She misses her sisters, but doesn’t think they have gone mad, as the scientists claim. She is also a pragmatic woman-when taken before a group of dragons determined to be her mate, she immediately claims to be Kronos’ mate, averting possible fighting and problems. She is determined that she won’t be controlled anymore, and he is the only male so far than she can feel anything for. I liked seeing Opalite grow into the strong and independent dragon swan she was meant to be.

Kronos, or Kros, is strong, handsome and has a few tricks he can use to help in a pinch. He is attracted to Opalite, and works very hard to convince her that he will never hurt her or take away her freedom. I liked that he was willing to be patient and wait for her to choose him, rather than force any issues.

There are a couple of sub plots here, involving the case against Opalite, and the quest to reunite with her sisters. I was delighted that I got to see how the sisters were doing with their mates, and was intrigued to see what they were up to. I was happy to see that the villain in this one was treated to what he deserved, and that Opalite and Kronos were able to get their well deserved happy ever after.