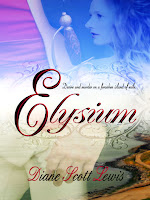 In 1815, after the battle of Waterloo, Napoleon Bonaparte and a few loyal followers are exiled to St. Helena.

On this remote, volcanic island, Amélie Perrault, the daughter of Napoleon’s head chef, struggles with her low station in life and a fascination with the fallen French emperor. When her beautiful singing voice catches Napoleon’s attention, she is drawn into his clash with their British jailers, court intrigues, and a burgeoning sexual attraction.

Napoleon is soured on love, yet this young woman’s selfless devotion tugs at his heart. After political maneuvers fail to release him from the island, he desires freedom no matter the risk—but will he desert the only woman who has loved him for himself?

Elysium, in Greek mythology, is where the gods are sent to die. Amélie suspects someone in their entourage is poisoning the emperor. Will she uncover the culprit in time and join in Napoleon’s last great battle plan, a dangerous escape?

Strong emotions in Elysium are bubbling near the surface all the time even though some of the characters work hard to keep them hidden.

Napoleon Bonaparte, defeated and a prisoner of the British, must reside on the harsh, end-of-the world Isle of St Helena. Many who serve in his household and a few courtiers who go with him suffer the same exile and miserable conditions of the island—far from the opulent court in Paris.

Nineteen-year-old Amelie, the head chef’s daughter, so naïve, innocent and loyal is one of the entourage. She feels she has a mission to protect “the emperor” that she loves from afar. Well-educated, talented, with lots of common-sense knowledge, she is an asset to this despondent group, but hers is a sad position even after she gains the attention of Napoleon.

Napoleon knows he has feelings for Amelie that he has no right to have. He talks of finding her a husband or sending her to study opera since she has a beautiful voice. However, she is the brightest spot in his life on the miserable island. The British isolate and put more and more restraints on him as the days go by and his courtiers contrive to use him for their own gain while pretending loyalty.

The clandestine planning, maneuvering, and back-stabbing create an atmosphere of discontent in his household while the British and the harsh climate demoralize everyone. However, among all this, Amelie “is like a caterpillar rustling in its cocoon”. She wants to become a free woman. Even though she feels that when she emerges, she will be more like a moth than a butterfly, she still feels she can soar just as high.

Once in Napoleon’s favor, she suffers household gossip and maliciousness, but she knows her heart and perseveres. Napoleon vows to love her more than himself, but admits to his egotism by saying he knows his capacity to love is flawed.

Diana Scott Lewis does a magnificent job of immersing the reader into the setting as she graphically describes the island’s slime, damp, foreboding smells and the harsh winds that buffet Napoleon’s abode. The smelly, ever-present bugs and vermin make one shudder. Her use of metaphors makes Elysium hum with life and life’s daily struggles under stressful conditions. They touch the senses and make the reading enjoyable. I was so tempted to list a few of them. They are most revealing.

Elysium lags a little at times as some things occur again and again on the island, but this does reinforce the feeling of misery and tedium of life under the stern rules of the British and the unending harshness on the trade wind side of St. Helena. However, after the three visitors arrive, the story takes on a new tempo. Life changes dramatically for all.

When action moves off the island and out of chronological order of events, there is a moment of confusion but soon it all comes clear and the reader is transported to a new stage of Napoleon and Amelie’s lives. Their happy-every-after has some scary, appalling obstacles to overcome before it is realized.