The Dragon King by Ciara Gold 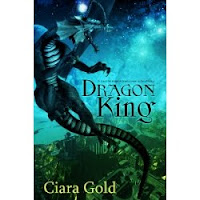 Tucker Bolen considers himself a renaissance man of the thirty-first century and balks at society’s rigid cultural practices. After purchasing and using a reincarnation reader, he not only connects with his past entities, he also suffers their bid to surface and claim his soul. A collector and explorer, one of the entities leads him on a quest for dragons and a journey that ultimately leads to the greatest magic - love.

Cari Barock fears many things; never finding love, an assassin bent on taking her life, and dragons. When a stranger from a distant planet arrives, she if forced to face all her fears. With her special Deliphit powers, she helps Tucker with his quest, never realizing that she is the key to unveiling his true powers. Will she sacrifice her heart so he can save her world?

Thousands of years ago dragons disappeared from Earth. The last wizard had sent them to far off planets, even though this meant his own death. Tucker has had his past lives restored to him and he sets off to find the dragons. He leaves behind an Earth vastly different from the dragon’s time. Medicine has taken huge steps forward and now woman do not have to physically bear a child. Mankind has developed also telepathy which has resulted in them becoming cold and unemotional.

Tucker’s search takes him to Mioisiad where he meets Cari, a Deliphit who can take on the shape and characteristics of others. Cari’s life is in danger and she has been sent from Pelicosia to Moisiad to keep her safe. Her people, the Verside, have knowledge of the dragons, and their ruler makes a bargain with Tucker. If he takes Cari as his mate and protects her, they will introduce him to a dragon. Neither Tucker or Cari are happy with the agreement, but Tucker feels it’s the only way he’s going to get near the dragons.

Before they can proceed with their plans the planet is attacked by the alien Zarlokes. Cari and Tucker must work together to help the Verside escape to Pelicosia and stop the Zarlokes following them. Tucker wonders about the strange feelings stirring inside him for Cari and his past selves are only to eager to explain it to him. Cari knows exactly what her emotions mean but is unwilling to start a relationship with a man who will leave her behind as soon as he gets what he wants.

I chose this book because of the title. Dragons are my favourite fantasy creatures. Sadly I was disappointed in this respect. Apart from a brief appearance, the dragons did not show up until the end of the book. This is a shame as the story is quite good but doesn’t live up to the expectations of the title. I would have enjoyed The Dragon King much more if I hadn’t been waiting for the dragons to appear.

Still, the worlds of The Dragon King were well crafted although I did feel a bit out of my depth at the beginning as the people and places were confusing. The author showed much more ingenuity when revealing the human way of life and social interaction. The Dragon King is a pleasant book with adventure, intrigue and romance. The planets appear medieval but have light technology based on zeel which is only found on Pelicosia. A good read with a well thought out plot.