Sibylla And The Privateer by Marina Oliver 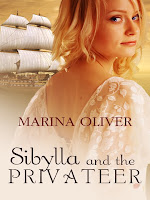 Sibylla is in love, but Randolph demands secrecy. Then she discovers he is plotting against her brother Gerard, a Royalist hoping to restore King Charles II of England to the throne. Once she learns his secret motive, Randolph means to silence her, but chance and Josselin, the French Privateer intervene. Together Sibylla and Josselin have to save Gerard from danger and the King from his enemies. Have they time?

In Sibylla And The Privateer, Marina Oliver brings us into a world of yesteryear: a world of old-style courtesy, but also of swashbuckling heroism; of domineering parents and persistent scoundrels, hot tempered young women and unexpected decency.

Sybilla is in love – and the only thing that mars this perfect relationship, is Randolph’s inexplicable desire to keep it a secret! Somehow this doesn’t seem as though he is the perfect man.

It can be a bit tough to sympathize with our heroine; she is, after all, too impatient and never hesitates to speak her mind. However, she’s snappy and interesting and never fails to keep your attention. She can hardly fathom her family’s attitude, but we guess that their suspicions come as no surprise to Randolph. And we, too must share some doubts about him…could he indeed be an unprincipled rascal?

Sybilla is far too headstrong to heed anyone else’s concern, and her insistence – or devotion – send her into a world a she could never have guessed; but to land among pirates.

A hint of something far off and historical about all the character’s speech intrigues and gives a hint of old-time flavor, but also slows the action. The dialogue isn’t bad but I find that I read it more and more impatiently. The author indulges in long paragraphs of back story, slowing the pace at the start. On the other hand, the ‘real’ action is so exciting, so ‘in the moment,’ that it more than makes up for those slower parts, and makes this ultimately very worth reading! I suspect that fans of the older style historic novel will not find anything to complain about…

If a taste of the sea is what you are after, Ms. Oliver surely does not disappoint: from the swarthy pirate searching hapless vessels for plunder, difficulties involving sailing, and the requisite swordplay, it is all here! Surprisingly, though all things appropriately ‘pirate’ appear, the plot is fresh and unpredictable, characters enjoyable, and all the action keeps you turning the pages. Do read.