The Sandalwood Tree by Elle Newman 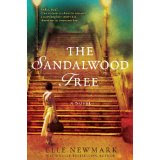 In 1947, American historian and veteran of WWII, Martin Mitchell, wins a Fulbright Fellowship to document the end of British rule in India. His wife, Evie, convinces him to take her and their young son along, hoping a shared adventure will mend their marriage, which has been strained by war.

But other places, other wars. Martin and Evie find themselves stranded in a colonial bungalow in the Himalayas due to violence surrounding the partition of India between Hindus and Muslims. In that house, hidden behind a brick wall, Evie discovers a packet of old letters, which tell a strange and compelling story of love and war involving two young Englishwomen who lived in the same house in 1857.

Drawn to their story, Evie embarks on a mission to piece together her Victorian mystery. Her search leads her through the bazaars and temples of India as well as the dying society of the British Raj. Along the way, Martin’s dark secret is exposed, unleashing a new wedge between Evie and him. As India struggles toward Independence, Evie struggles to save her marriage, pursuing her Victorian ghosts for answers.

Bursting with lavish detail and vivid imagery of Calcutta and beyond, The Sandalwood Tree is a powerful story about betrayal, forgiveness, fate, and love.

It is the mid-twentieth century and (importantly) the aftermath of WWII. Evie Mitchell, husband and young son travel to India. It is the end of British rule, and the very start of enormous political strife within the country. However, political machinations are mostly a matter of backdrop. In all points, it is individuals who matter in this exquisitely written novel.

Parallel love stories twine the lives of Evie and Martin (and a few friends) from the twentieth century, realistically with the lives or histories of people who lived in their same home nearly 100 years before.

The incredibly rich and detailed backdrop is all the sights and sounds and smells of a foreign land, as it can only be experienced through the eyes of a person completely new to it. And Evie is somehow both open to the amazing world around her and the experiences of others, and simultaneously, purposefully, insulated. She lives there, but remains, in some sense, always a tourist. She adores Rashmi, her native housekeeper, but wants all her servants to learn English rather than she, in this foreign land, attempting to learn the language. She is intrigued by the histories of past lives and the impact and relationships of those lives of those of today, but not, it seems, in the case of the natives. This doesn't mean that a Hindu is left merely a shadow character - indeed, few could be more amusing than her cook, who will one day declare the imminense of an eggplant, and the next, disown it completely. Even so, the truly important people here are all of a western civilization or heritage. Through superb characterization, Newmark easily demonstrates how this was not an oversight on the part of the writer. This subtle failing is a purposeful part of Evie's, and somehow it makes her more human; exposes a fear or a failure any expatriot might identify with and it generates both impatience and sympathy in the reader.

Her husband Martin's failure is more secret, more defined, and ultimately a catalyst for the future. Their relationship, doubtful at the start, does change throughout, though Evie's struggle to reach her husband is less important (to her) than her struggle to uncover and connect to the past. The dangers, possible loss, and emotion turmoil they will face is sometimes foreshadowed, but often not. There are physical dangers – possible loss – as well as the emotional strife.

Newmark's contribution to serious literature must be acknowledged...yet the overall appeal of this specific storyline is limited. Literary fans will grumble at some points, while romance fans, at others. Still, I found this book utterly worth reading and I will be looking forward to her next, because her skill with the written word is most obvious.