The Untied Kingdom by Kate Johnson 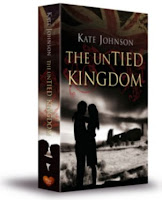 Major Harker is fighting on the losing side of an endless civil war in a third world country. It’s called England.

He’s a man with a lot of problems. His ex-wife has just drafted her little sister into his company. His sworn enemy is looking for a promotion. The general wants him to undertake some ridiculous mission to capture a computer, which Harker vaguely envisions running wild somewhere in West Yorkshire. And some damn idiot has just flown out of nowhere and nearly drowned herself in the Thames.

She claims to be a popstar called Eve. Harker doesn’t know what a popstar is, although he suspects it’s a fancy foreign word for ‘spy’. Eve knows all about computers, and electricity, and the words to many seditious songs. Eve is dangerous. There’s every possibility she’s mad.

And Harker is falling in love with her.

Broke, in debt to the tax man, reputation tarnished, Eve is positive things can’t get worse. She is earning money by doing a Where Are They Now? show. Unfortunately this means doing a lot of stupid things to raise the ratings.

Then a parachute jump goes wrong and Eve falls through a hole in time to a parallel universe. Confusion reigns when she discovers the world she knows no longer exists. This Earth has a few similarities, but also many things she doesn’t know. For instance there was only one European war - the one with Hitler and England on the same side! The country Eve knew as England is now in the throes of a civil war between the Coalitionists and the Parliamentarians.

The good guys, the Parliamentarians, believe Eve is a spy. They discover the enemy is winning with the aid of computers. Eve knows how to use a computer so they drag her along when they set out to steal one. Major Will Harker gradually comes to the conclusion she is what she claims to be, a woman from an alternate Earth.

This book is a wonderful mix of time travel and parallel universe. The setting of Earth as it would have been without the British Empire, the First World War and various other important events has left England a backward, agricultural nation. Harker is a true blue honest Englishman, loyal to his country and the army. The more Eve gets to know him the more she is drawn to him. Harker fights to keep his emotions under control, afraid he might fall for Eve and then find she is a spy.

From the very first words Eve drew me into her life of numb misery. Harker’s arrival portrayed for me the scene and characters of the alternate world. There followed a ride of action, humor, agony, death and destruction. And of course love.

I had to follow closely to discover who loved who, not only in the main characters but also in the not so minor characters. Action flowed through the story, with intrigue, liveliness and an underlying humor even at times of great adversity.

The twist on the title became obvious. At first I took it to read The United Kingdom and couldn’t understand why the second word had been written Untied. This reason became clear as I delved into the exploits of Eve and Harker. By the time I finished I knew the title fitted the book perfectly, giving a realistic definition to the main plot.

It’s not often I give a “Best Book”, but The Untied Kingdom certainly deserves this rating. It’s a book that drew me in until I had to get to the end to find out what surprise the author had written to finish the book.

Well done Ms. Johnson, if this book is a sample of your writing, then I would love to read more.