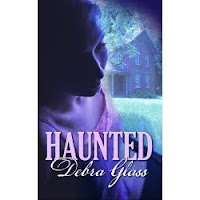 Wren Darby’s hopes of having a normal life died when she did. Especially since her near death experience has left her with a disfiguring scar and psychic ability. Not exactly most‑popular material. Now Wren has moved to a quaint town in Tennessee. Known for its sprawling antebellum homes, Columbia seems like the perfect place for Wren to recover from the scars she bears both inside and out.

There’s just one problem—her house is haunted by Jeremiah Ransom, the handsome ghost of a young Civil War soldier who lived and died in her new home.

As she grapples with the terrifying new skills that come with being a psychic, Wren realizes she may not be prepared for a strangely beautiful love that just might last forever.

Have you ever seen a ghost? Wren has. She’s even touched him… And now she wants to marry him.

Ms. Glass writes this story from a first person perspective and it reads very well that way. You feel as if you are the person involved in the story and it really makes you empathize with Wren’s problems and her unlikely romance. There is also another ghost story intertwined that doesn’t show up until the end of the book that adds another dimension of danger and magic.

Wren feels responsible for the death of her best friend in high school. The car accident leaves her with a physical scar, but her mental scar is her biggest problem. Her parents move her to another city to begin a new life. That’s where she “meets” Jeremiah. He died in that home during the Civil War years.

The author takes an impossible situation and makes it believable. I’m not a great believer in ghosts, but I have had some ghostly experiences so I can’t just write them off. This story is done well enough that you have no trouble believing Jeremiah is kissing Wren and holding her and loving her. Ms. Glass also adds a Goth character, Briar, who is determined to get rid of Jeremiah and becomes an enemy of Wren’s.

The ending of this story is very ironic. I’m sure that there will be a sequel because the ending leaves several questions in the reader’s mind. Ms. Glass has already given you enough information to entice you to continue reading about Wren, Jeremiah and Briar.