Summon the Wind by Abby Wood 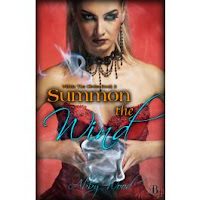 Mature and wise, Alexis takes her job as the eldest Jacobson triplet seriously. When Lance, the ten-year-old boy from Camp Enchantment, shows up fifteen years later claiming he'd asked the Goddess to let him know if Alexis ever cast a spell for love…that is playing with too much magic!

Unwilling to believe a witch is her true love, she raises the wind to get rid of him. Little does she know that Lance has a secret of his own that will change all of their lives on All Hallows Eve.

Summon the Wind by Abby Wood is a good little read. The concept is an interesting one. Three triplet sisters, witches, use their powers to summon love. This is Alexis’s story, and her goal is established early: find a man or, to be more specific, true love.

The sisters cast a spell. Alexis’s sisters have their men. They got regular guys. Alexis is not destined for the same. When she says male witches could be trouble, I became curious to see who she would draw her way, and what would happen. I expected trouble.

She runs into Lance, an old friend from childhood, in the library at closing. They are quite alone, and the things he professes to her after a fifteen-year-long absence are surprising.

This story is well written, the author obviously being experienced, and I enjoyed the easy flow of this tale. One thing that struck me as odd though was that one second Alexis feels manipulated (making me as a reader want to know more) then only after a brief calling of the Goddess for advice, she completely flips her stance. Not even five minutes have passed, and she does something I could not have predicted mere minutes before, based on her feelings.

When the logical end of the story arrived, there was more to be told. There isn’t much tension or conflict in this story, but the premise is interesting, and the ending is happy. I like that a lot when stories end on a positive note.