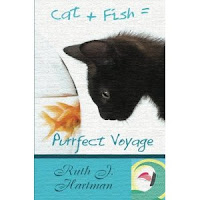 Kitty Carter is used to getting into strange situations when she chases her cat, Arthur. But this latest escapade is just too much! When Arthur chases a mouse at the marina while she's doing research for her book, she follows him down the dock and onto a yacht. Not entirely her plan, since she falls down some stairs and hits her head, and wakes to find herself out to sea. And she and Arthur aren’t the only ones on board!

She was just trying to catch Arthur, she never meant to fall down the steps and knock herself out…

This author must own cats herself. She understands all too well feline wiles and how they can manipulate you. Ms. Hartman also has a sense of humor. It makes her story fun to read.

Her characters are both busy people who live alone. He’s married to his work; she was jilted at the altar. When they meet in the galley of the boat after her fall, neither one is looking forward to spending two weeks together. Unfortunately they are well at sea by the time she wakes up and he has to deliver the boat to Hawaii within a certain time frame. She decides leaving Alaska behind to spend some time in the sun in Hawaii might not be a bad thing.

Ms. Hartman names the cat Arthur. The male character is also an Arthur, which creates some comic confusion. When he suggests they call the cat “kitty”, she objects because her name is Kitty! There are several other scenes that will make you smile as they try to adjust to each other. It’s especially hard because he doesn’t like cats…

The story is well paced and keeps your interest. It’s fun to watch the characters try to avoid the attraction between them. The author drew me into her story easily and I enjoyed watching the antics of the cat and the people both. I found this to be a very good read, why not get yourself a copy and try it?