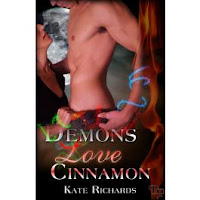 Archaic and powerful demon, Alessandro, knew never to disappoint his overlord, but Samhain night on Earth is a new experience for this red-hot guy. When a captivating scent leads him to a Halloween party, he finds Gwenny. The witch is everything he never even knew to dream of. The only problem is, he's due back in Hell in the morning with somebody’s soul…and it looks like it may be hers.

Unable to resist Alessandro's wicked allure, Gwenny doesn’t realize the danger she's in until their night of passion comes to an end. If Lucifer's demands are refused, will they both survive, or will Gwenny lose her heart and soul to her cinnamon-loving demon?

Ok, so you might. A Demon and a witch. Sounds a little cockamamie, but read Demons Love Cinnamon. It’ll all make sense and be worth the ride!

Kate Richards writes a new twist on the paranormal story and with the author’s easy writing style, I couldn’t put this book down. I wanted to get more into their world and have fun at the party, but the whole time I read, I loved it.

Gwenny isn’t your everyday, average, ordinary witch. She’s strong, independent, and darned cute. She knows what she wants, who she wants, and won’t let others sway her. I really enjoyed reading about her. I couldn’t identify with the witch part, but the strong woman? I could totally understand. Then there’s Alessandro. Even with the hastily concealed horns, this man embodied sin and sex. And why not? He’s a demon—he’s supposed to be irresistible. And that idea—his being irresistible really works in this story. Then again, his having a heart and conscience works, too.

The real thing that kept me wondering about this book was the length. I felt like there were more than a few times the author could’ve expanded on the story. I liked the build-up, but I wanted to see more, more of the life they led, more of the things she did with her life... And the ending seemed a bit quick. Now, it’s a short story. Things should move fast. I just felt there was more than one instance where it moved at light speed. But, I did enjoy the ending the best. In some ways I saw it coming, and in others I didn’t. Maybe it was the how that intrigued me—how the ending was portrayed. Regardless, I liked it.

If you want a scorching hot paranormal, then you need to read Demons Love Cinnamon.