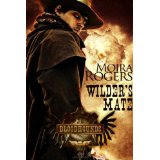 Think a vampire-hunting bloodhound is dangerous? Try threatening his woman.

Wilder Harding is a bloodhound, created by the Guild to hunt down and kill vampires on America’s frontier. His enhanced abilities come with a high price: on the full moon, he becomes capable of savagery beyond telling, while the new moon brings a sexual hunger that borders on madness.

Rescuing a weapons inventor from undead kidnappers is just another assignment, though one with an added complication—keeping his hands off the man’s pretty young apprentice, who insists on tagging along.

At odds with polite society, Satira’s only constant has been the aging weapons inventor who treats her like a daughter. She isn’t going to trust Wilder with Nathaniel’s life, not when the Guild might decide the old man isn’t worth saving. Besides, if there’s one thing she’s learned, it’s that brains are more important than brawn.

As the search stretches far longer than Wilder planned, he finds himself fighting against time. If Satira is still at his side when the new moon comes, nothing will stop him from claiming her. Worse, she seems all too willing. If their passion unlocks the beast inside, no one will be safe. Not even the man they’re fighting to save.

Moira Rogers has created an alternate American Wild West, one with vampires, and ghouls and men created to combat the evil caused by them. It is not a gentle world, and the people she populates it with have to take risks to live.

Satira wishes to rescue her mentor, Nathaniel, from the evil vampire who has taken him for his skills at creating weapons. The Guild has sent Wilder Harding on the assignment, and Satira is determined to go along.

Wilder is a bloodhound, created by the Guild to hunt and destroy vampires in the American frontier. He considers Satira’s presence on this mission as a distraction, and warns her of what she could face if she goes along. Satira knows she is the only one concerned with Nathaniel’s well being, and as his apprentice, she has knowledge that could make the difference between success and failure. Satira was raised in the household of a bloodhound, so she is well aware of the effects that the new moon and full moon will have on Wilder, and a part of her wants his passion.

As they travel together, Wilder gains a grudging respect for Satira’s determination and courage, and soon come to care for her more than he thought possible. Can these two work together to rescue Nathaniel from the evil vampire? Can Satira prove her worth, as a woman and as an inventor? Can Wilder claim Satira, and take her as his mate?

I enjoyed the trip with Satira and Wilder, and liked watching the learning experience they both went through. The characters in this are not like any I have read, and it was a fresh, new read.

Satira is a smart and sassy woman, and her talent for creating weapons is a definite plus on this mission. I loved watching her smart mouth Wilder at every turn, and I also completely enjoyed watching her slowly fall for him without realizing it. Her courage when she accepted him in his bloodhound phase was wonderful.

Wilder is a wonderful character. He is a strong, sexy and handsome man, but, as a bloodhound, he is much more. There is a leashed violence in him, and he is determined to protect Satira from that side of him. It was wonderful to watch him slowly fall under her spell, one she never realized she was weaving. I liked his honesty, his refusal to candy coat things just because Satira was a female.

I enjoyed watching these two ‘do the dance’ and fight the attraction building between them. I just knew that, when they finally gave in, the passion would explode off the page, and it was hot beyond belief. I also like the idea that Satira found out that some of her beliefs about bloodhounds were not the truth, and that there was hope for a fantastic life with her man. I look forward to much more in this world, and hope to see many more adventures in this Wild West of Moira Rogers’ creation.