Want to Know a Secret? by Sue Moorcroft 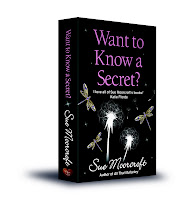 Money, love and family. Which matters most?

When Diane Jenner’s husband is hurt in a helicopter crash, she discovers a secret that changes her life. And it’s all about money, the kind of money the Jenners have never had.

James North has money, and he knows it doesn’t buy happiness. He’s been a rock for his wayward wife and troubled daughter – but that doesn’t stop him wanting Diane.

James and Diane have something in common: they always put family first. Which means that what happens in the back of James’s Mercedes is a really, really bad idea.

In a tangle of “in-law” relatives that she did not know existed, Diane Jenner changes into a vibrant, can-do woman after twenty-five years of being controlled by her disgruntled husband Gareth. Gareth had told his secret family that she was in poor health and agoraphobic. When James, the secret brother-in-law, tries to manage her time and affairs, she informs him that she is not ill, is not an imbecile, and will not tolerate being patronized.

Gareth and his half-sister Valerie are in a helicopter crash and unconscious in the hospital when Diane learns Gareth has been lying to her about money and lots of other things. While she’s been living in an out-of-the-way area, with no car, and on a limited budget that she supplements by sewing and selling customized clothing, he has been living quite well. While he is unconscious, she emerges from her ‘doormat’ mode and takes control. She feels empowered to have control of money, car, and her own life. Not even Gareth’s half-brothers, that have always expected him to give them money, can dissuade her from managing her own affairs—a managing that does not include supplementing their incomes for the luxuries they do so love.

While Gareth and Valerie mend in the hospital, Diane’s relation with his secret family blooms. James, Valerie’s husband, is intrigued by her. She is so different from his wife and daughters that accept his providing for and protecting them as their just due, while Diane makes her own way. His daughter Tamzin, even though fragile and beset with clinic depression, gravitates to Diane. Harold, Gareth’s, father, is a dear that reminds Diane of the life of privilege she lived before marrying Gareth.

James, wealthy and an excellent manager of situations and finance, is drawn to Diane and wants to help her, but is summarily put in his place when he tries to take over her business plans. He is so accustomed to managing everything in his business and in his family’s life he is not even aware he is doing it. He admires her strength, competence, common-sense, intelligence, and her motivation. He sees Diane marching on to build a productive life while Valerie seems bent on self-destructing—a process she’s been working at for years.

The secondary characters add sub-plots that involve greed, social issues, social mores, and psychological issues that devastate at times. Diane and Gareth’s daughter Byrony, George, a cousin, and James’ daughter Tamzin wrestle with young adult issues in a sub-culture unique to that age group. Their involvement with the adults and particularly Diane reveal deep-seated fears, hopes, and dreams. The extreme highs and lows in their lives create some anxious moments and exciting moments.

Harold, Gareth’s and Valerie’s father, carries a burden of guilt that touches the heart. His efforts to rectify wrongs make the reader very aware that youthful indiscretions can leave deep wounds that never quite heal. While Harold works to make a better life for his family, Gareth, with his hang-ups and manipulative ways, makes one want to say, “Grow up”.

With a touch of subtle humor, Sue Moorcroft weaves flawed and vulnerable characters into the plot and sub-plots as she moves them toward fulfilling lives. To me the plot seems a little unfocused so the love story almost gets lost in the mundane pursuits of the characters. However, the metamorphosis of Diane that sparkles with joy is beguiling and the secrets that keep coming to light keep one turning pages.