The Silver Locket by Margaret James 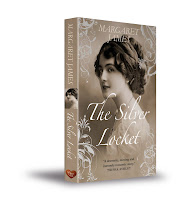 If life is cheap, how much is love worth?

It's 1914 and young Rose Courtenay has a decision to make. Please her wealthy parents by marrying the man of their choice - or play her part in the war effort?

The chance to escape proves irresistible and Rose becomes a nurse. Working in France, she meets Lieutenant Alex Denham, a dark figure from her past. He's the last man in the world she'd get involved with - especially now he's married.

But in wartime nothing is as it seems. Alex's marriage is a sham and Rose is the only woman he's ever wanted. As he recovers from his wounds, he sets out to win her trust. His gift of a silver locket is a far cry from the luxuries she's left behind.

What value will she put on his love?

Every choice has a consequence.

Rose and Alex come from very different worlds. Rose is the only daughter in a wealthy and well respected family. Alex was born out of a scandalous affair between his mother and an artist. Despite the gap in their social standing, Rose is drawn to Alex. However, her parents have another suitor in mind, Michael Easton. Rose isn’t sure how she feels about Michael. He’s handsome and charming, but he doesn’t stir her blood the way Alex does. When war breaks out, Rose defies her parents and goes to France as a nurse. There she runs into Alex. The attraction between them is as strong as ever. Unfortunately, Alex is no longer a free man. Even though he’s married to Chloe, Alex pledges his love to Rose, but can she trust him? Will Rose give up everything for a man she might not be able to have?

When I read the blurb for The Silver Locket, I was immediately intrigued by the idea that the hero was married to someone other than the heroine. I wondered how the romance between Rose and Alex would play out. Would Alex leave his wife for Rose? Why did Alex marry Chloe when he has always loved Rose? These questions kept me turning pages in pursuit of the answers.

When I first started reading The Silver Locket, Rose seemed like the typical bored, rich girl. When she leaves her life of luxury to become a nurse, it didn’t seem as if she did it because she had any real concern for the wounded soldiers. She simply wanted to get away from her dull life and have an adventure. However, once the grim reality of war set in, I was pleased to see Rose begin to change. She learned very quickly how to become a real nurse and genuinely cared for all her patients. Her work also brought her into contact with people from all walks of life, and she learned not to be judgmental of others. It was a pleasure watching Rose transform from a spoiled girl to a strong, caring woman.

I have often come across heroines who are just too sweet and trusting. I was pleased to discover that was not the case with this story. When Ms. James created Rose, she definitely gave her some flaws. Even though Rose eventually came to care about her patients, her initial decision to become a nurse was done because she was bored. Impulsively, she left her family without telling them what she was doing. This was a selfish thing to do and caused her family a great deal of pain. Rose’s decision to get involved with a married man can also be seen as a flaw. While it would be easy to simply label Chloe as a gold digger and cheer for Rose, Chloe is legally married to Alex. Rose truly loved Alex, but she was involving herself with a man that wasn’t hers. This decision also had unpleasant repercussions in her life. These flaws made Rose a very real and well rounded character. While I didn’t always agree with the decisions Rose made, I grew to like her as I read.

Alex also seemed simple at first. He was the dark, brooding hero harboring a love for a woman who seemed out of his reach. However, matters became more complicated when he married Chloe. Even though he felt like he was doing the right thing at the time, this decision came back to haunt him the moment Rose walked into his life. Alex doesn’t love Chloe and has never cared what people thought of him, so he has no qualms about beginning an affair with Rose. Though this seems romantic, this choice also brings with it some inevitable consequences and brings up some questions about Alex’s character. If he takes his commitment to Chloe so lightly, how can Rose believe that he won’t abandon her eventually? While this doesn’t make Alex the most likable hero, it does make him a very real one.

What I liked most about The Silver Locket, was the theme that every choice has a consequence. Even when Rose and Alex made choices that they felt were right for them, the effects of those decisions weren’t always pleasant. I liked the fact that Rose and Alex didn’t despair when life didn’t turn out as they planned. They simply made the best of their situations and continued on the path they had chosen. This really served to make the characters and their plights seem very genuine. I found it easy to believe that people like Rose and Alex could have lived and served during World War I.

The only issue I had while reading The Silver Locket was that at times I felt that the transitions between scenes were a bit choppy. I would be reading about Rose at a crucial moment and then find that the next paragraph was following Alex in a place in a completely different part of the world. I found this a bit disconcerting. However, I was able to get used to the flow of the story fairly quickly, and it didn’t detract from my enjoyment of the material.

I enjoyed reading The Silver Locket. The characters were lifelike and the romance was moving. I recommend it to any fan of realistic historical romance.