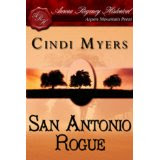 Lieutenant Michael Trent was not the marrying kind – in fact, he was a notorious rogue, known for romancing the ladies and barely skirting the bounds of legality. But when his commanding officer orders him to marry lovely Ellen Winthrop, he determines to do his duty by her and protect her on the journey from Texas to California by way of Mexico.

As for Ellen, she only wants safe passage with the Army to California, where she hopes to locate her wayward father. But the handsome lieutenant distracts her from her goal – and all thoughts of propriety. Alone for so long, Ellen wants more from her husband than a marriage in name only. Will she be the seduced – or the seducer?

A dilemma that Ellen Winthrop and Michael Trent grapple with is whether breeding defines a person or if one can make his or her own destiny regardless of parentage. Past experiences cause this damsel in distress and this dashing rogue unease about their future.

Assumptions and deliberate omissions create a tenuous environment for Ellen and Michael. Their agreement, made to help each of them out of a tight spot, keeps them in close proximity to each other, setting off needs, desires, and concerns new to both of them.

Rather than marry her disgusting, creepy cousin and live with the stigma that has colored her life, Ellen runs. She travels alone from England to South Texas where she makes a decision that sets her life on a new course. Ellen looks like a lady and acts like a lady, but she is no shrinking violet, she is a survivor. Not afraid of work and very capable, she never fails to keep up her end of the bargain she and Michael make, but soon knows that she wants so much more with the handsome lieutenant.

Michael Trent is every inch the West Point officer, but deep within himself his childhood traumas and insecurities taunt him. His self-esteem had too many blows early in life, so Michael knows he is not what any Earl’s daughter would want for a “long-term” husband. He and Ellen maneuver around their doubts and fears as love weaves its magical web around them with gentle determination.

Some of the secondary characters like Dr. Sullivan and Katherine create stories that delight as their lives are entangled with Ellen and Michael’s lives. The crude, disreputable Texas Ranger Dunleavy creates intense situations that make the adrenaline pump. His Scottish heritage and almost barbaric ways make him an unusual individual. His hatred for Michael and his attraction to Ellen create events that reveal much about the values, hope, fears, and dreams that each of the three have.

Cindi Meyers weaves in a delightful humor that makes San Antonio Rogue sparkle. To me, a few things don’t weave into the story smoothly such as the meeting of Simon Leland and the somewhat repetitive introspection of Michael and Ellen. However the beautiful imagery and descriptions make me feel as if I’m right there in the setting, which is sometimes harsh and other times breathtakingly magnificent, as the characters deal with life-threatening situations, with hardships, with the joy, and the ever-so-special, ever-present love.