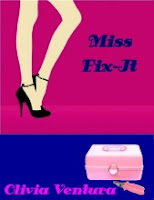 Veronica, a self confessed girly-girl, often finds herself labeled a bimbo--and just doesn't care. An ex-economist turned handy-person, Vee is not afraid to be female, period. If it happens to be in a male-dominated industry, well - so what?

When Vee threatens a client with a hammer to ward off his wandering hands, she finds herself at the local police station facing charges of assault. There she meets Detective Cole Samuels, and the sparks thrown off by their mutual animosity soon become combustive. They quickly become involved in a hot and heavy relationship, leaping one hurdle after another, including Cole's emotionally destitute mother and Vee's deep-seated fear of being cheated on. Things finally seem to be working out when Vee's workplace is vandalized, a message left...and suddenly that crank call and the near-miss with the crazy driver don't seem to be harmless incidents any more. Vee's stalker rapidly escalates in violence, leaving Cole determined to find him before Vee gets hurt....

The author caught my attention immediately because her main character is blonde, gets her fingernails done, wears customized coveralls and carries a pink hammer. And, even though it’s untraditional role for a female, she likes being a handy “person”!

This is a fast paced story filled with outrageous characters. Her lead characters are strong and opinionated people and they take turns throwing zingers at each other. His mother is rude and unkind. Her family is huge. And someone is stalking Veronica…

I found it easy to relate to this story because the main characters relationship reminded me of my own with my husband. We like to tease each other that way, too. And I had a mother-in-law that never liked me either, so it was refreshing to see someone worse. Ms. Ventura’s writing made me care about these characters and feel like I was involved in their lives.

The author doesn’t hesitate to make her character’s confrontations realistic. Their emotions are honest and the plot is interesting. Ms. Ventura shows a good insight into female mystique and bitchiness. Her fresh, rollicking style of writing reminds me of Janet Evanovich’s. Veronica doesn’t have a gun, but her boyfriend does.

The story is so entertaining and exciting you don’t want to set it down. With suspects everywhere, Cole’s mother telling Veronica she can’t marry Cole, he’s already got a fiancé, and more, you find yourself caught up in the story and anxious to see how things are resolved.

The romance adds an extra dimension to the mystery of who might be stalking Veronica and why. To me, it made the book even more enjoyable with the mix of emotional issues and the danger of the stalker.

I’d like to see more books from this author. I like her smooth style of writing and enjoy reading stories that are fun as well as entertaining.