The Good, The Bad and The Undead by Donica Covey 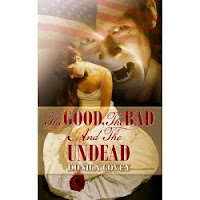 During the Battle for New Orleans, Julian Mathieu Thibodaux’s life was changed forever. After being attacked by a British soldier he awoke to find his senses sharper—as sharp as his teeth at his unnatural craving for blood.

The War destroyed Jezebelle Winston’s life. First, Union soldiers killed her brother and father, then her distraught mother took her own life, leaving a young Jez alone and at the mercy of a brothel owner named Audie Jenks. Now all Jez wants to do is escape the life of a prostitute.

Matt has spent the last fifty years trying to come to grips with the evil that possessed him that day on the battlefield. He’s lost the love of his life, his way and his hope. He doesn’t know how to save himself but that won’t stop him from helping a desperate, frightened woman escape the vile man that’s held her helpless for more than eleven years.

Two tortured souls ravaged by war ~ one mortal, one not.

Julian “Matt” Thibodaux was a soldier during the Battle for New Orleans. A freak encounter with a British soldier changed his life in a most unusual way. Upon awakening from the attack, Matt now craves human blood. Confused and embittered, he wanders for fifty years without hope or direction.

Jezebelle Winston’s life as she knew it was ravaged during the War Between the States when her father and brother were killed and her distraught mother took her own life. Alone and vulnerable, Jezebelle is taken in by cruel brothel owner Audie Jenks and forced to work as a prostitute.

When their paths cross, both Matt and Jezebelle are looking for escape from their lives. As events unfold, perhaps their chance meeting can free them both.

After reading this short book I had the most unusual experience. The more I thought about the story and the characters of Jezebelle and Matt, the more my affection for the book grew. In a time where the conventional vampire story has been spun out over and over again, The Good, The Bad and The Undead has a clever little plot with interesting characters that will touch your heart and keep you reading.

If I have any criticism of the story itself, it is that it is far too short. I would have loved to continue on with the tale, which means that the author did a great job reeling me in and making me care about the characters. There are also a few very minor historical issues which most readers probably will not notice.

Overall, The Good, The Bad and the Undead is a worthwhile read that is just begging for a sequel.