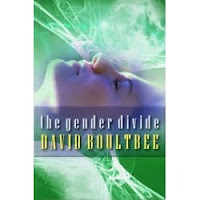 Ryan Peters is an anomaly. In a world where women live four times as long as men do, Ryan is one of a few men with a similar lifespan. This difference in lifespan has had profound consequences on the world balance of political, economic, and military power and has created a social Gender Divide that threatens to tear the world apart. Determined to close this Gender Divide, Ryan will sacrifice anything to succeed. The Gender Divide has already cost him the one true love of his life and even though he has a second chance, he won't let that stand in his way. He is even willing to give up his own life... and in a sense he already has.

On futuristic Earth, cars fly and women are on the top of the food chain. Men are designated the weaker and less experienced gender. They are stuck under corporate glass ceilings and women have the lucrative careers and high paying jobs. They dominate most fields, run the governments and corporations. What has given women the edge over men? They live three to four times longer.

Ryan Peters enters the world of Delphi Inc., the largest biotech company in the world. There is something Ryan is hiding. He’s not like other men. He’s been altered to lengthen his life expectancy to something similar to women. Olivia Morgan is CEO of Delphi and the woman Ryan loved forty years ago.

There is a sense of secrecy about Ryan from the very beginning. You know that he's older than he appears (and age is a big deal in this world) but you wonder what else he’s hiding? What is his agenda at getting hired at Delphi and entering back into Olivia’s life?

Olivia struggles with her growing attraction to Ryan because she had a relationship with (who she believes to be) his father 40 years ago. She doesn’t know Ryan's secret. As a reader you are engrossed in this relationship, wondering why Ryan is pretending to be his own son, how he's stayed young and why he's keeping a it a secret even from his former lover. The big question becomes what happens when Olivia finds out the truth and what it will all mean.

I must admit that I haven't read much sci-fi in years, but I took a chance on this title and was not disappointed. Though there is a bit more telling than showing in the prose, the story carried along very well so I didn't find it distracting. The plotline that women live longer and gain an edge over men because they no longer menstruate might sound a bit far fetched but the way it is explained made it totally believable.

I do have to put a warning in here for romance readers. This book contains a love triangle of sorts and events occur that might offend the standard romance reader. But as this is officially a sci-fi novel it is perfectly acceptable. However for this reader, with this switch in affections, it made this new coupling a bit anti-climatic by the end. It was hard to know which relationship to root for.

The book itself was quite entertaining, well written and each page keeps you guessing. I found it very interesting to read a book by a man about how women now dominate the world. I felt drawn to the sophisticated style of writing which I found addictive and will be looking for more from this author.