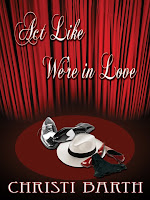 Linnea Larson is appalled when a Hollywood hunk is hired to star opposite her at her family's theatre. Known for playing a superhero onscreen, and a super stud offscreen, doesn’t convinces her he has what it takes to share her stage. Due to a pact with her best friend, she never dates actors.

Despite his fame, fortune and an endless string of women, Luke is dissatisfied with his picture perfect life. He escapes to his theatrical roots to find wary cast mates, a best friend convinced the show will ruin Luke's career, and an adorable costar who refuses to date him. Far from Hollywood’s spotlights, can he find happiness in the footlights of a tiny Theatre?

Despite Luke dragging her into his paparazzi nightmare, Linnea can't deny his irresistible charm. Their fling has a guaranteed expiration date. Why risk the inevitable heartbreak? Their job is to act like they're in love, but will they decide it's worth the leap to fall in love for real?

Lights, camera, action! Act Like We're In Love is an interesting story, but takes a while to kick off and generate interest.

The first situation is one we've seen before. Linnea is literary swept off her feet by Luke, who is obviously someone famous, though she initially doesn’t realize.

However, as I read on, the plot slowly developed into something more and the somewhat stereotypical characters grew on me. Nonetheless, the author does become a bit repetitive on how fabulous Luke is and how fantastic his kisses are. The descriptions, though are well composed and sweet (along with spicy at the right moments), and the novel has some great humorous moments (Luke’s manager, Wes becoming angry was hilarious) as well as some very witty dialogue. Those were the things that kept me turning pages.

The secondary characters were well managed, though the way the relationship between Ingrid and Wes was heading, they could have gotten a novel to themselves (actually that would have been quite interesting).

The best thing about Act Like We're In Love is without doubt the theatre-like feeling I got while reading the novel. Loving theatre and having had the chance to be part of the backstage, I really felt the nerves, the preparation, the gossip, and the theatre jokes that run throughout the novel.

Although the ending was a bit abrupt after everything the characters went through, it was well thought out and very endearing. Act Like We're In Love is a sweet, cute read that will leave you feeling happy and satisfied.

Posted by The Long and the Short of It Admin at 4:20 AM