A Way Back by Linda LaRoque 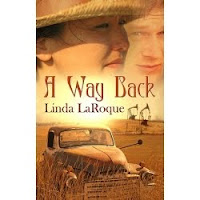 Amber Mathis, a Wall Street investment banker, returns to her office after burying her mother. Distraught, tired of the rat race, she's determined to make a career change. In the elevator she falls and rises to find herself in a vintage lift. The date is February 25, 1930, and a man stands on the window ledge ready to jump.

Wellman Hathaway, owner and CEO of Hathaway Bank in New York struggles to pay his depositors half their losses. A woman claiming to be from 2011 appears in his office and involves him in a scheme that forces them into marriage. With Amber's knowledge of the financial history of the 1930s, they travel to the oil fields of Texas to recoup Wellman's funds.

Two people from different centuries are thrown together to survive a difficult time. Will they find more than A Way Back to prosperity?

Amber Mathis, a twenty-first century investment banker, after burying the most important person in her life, finds herself catapulted back to the early 1930s. The banking world is in disarray after the Crash in October of 1929 that set off “The Great Depression”.

Her intelligence, can-do attitude, and education plus the fact she knows how the coming years unfold make her a valuable asset to the banker Wellman Hathaway as he tries to make enough money to pay all of his depositors.

Disgruntled clients threaten Wellman until fast-thinking Amber forestalls their cruelty with a plan Wellman does not like. However, from that point, she and Wellman proceed to have an adventure that takes them both out of their comfort zone.

Linda LaRoque takes the reader on a vicarious experience as Amber and Wellman brave the wild, rowdy, dirty oilfields of Kilgore, Texas, in 1930. Trusting Amber’s memory and business acumen, they plan to regain financial security.

While neither of them plans to fall in love, their unique situation thwarts Wellman’s “once-burned, twice shy” determination as he and Amber share the same bed.

Amber suffers culture shock even though she knows about “a woman’s place” in the early twentieth century as compared to that of twenty-first century women. She pushes the limits and then some to get what she wants economically, but in the love department she fears she has failed.

Ms. LaRoque’s descriptions of settings and emotional stress of that time are amazing and attention keeping. Even though A Way Back is short, the characters come to life as she tells of Alva’s swollen feet and legs, of Samuelson’s fury, and of the odor of unwashed bodies that labor under horrible conditions. She assails the reader’s senses with the smell, feel, sight, and sound of an oil well blowing. Of course, the Wall Street bankers’ condescension when Amber takes control of the bank is not to be missed—so many “unladylike” words come to mind to describe them.

How Amber and Wellman cope with a situation forced upon them in a disastrous economic time creates sad, funny, and emotional charged events as they each reach for a happy-ever-after that looks impossible. While A Way Back is an incredible revelation of the tremendous changes that have taken place in less than a century, it is most of all a beguiling love story about two caring people.

This time-travel tale makes me so thankful for all the benefits of the time I live in. Good reading!

Posted by The Long and the Short of It Admin at 4:03 AM