Shade of Grey by Yolanda Sfetsos 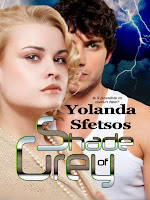 The night two intruders dressed in black break into Gypsy’s store, a mysterious, sexy man comes to her rescue. Calvin has one objective—to keep both a secret organization and an alien clan from finding and taking Gypsy. But after they meet, his duty is overridden by his desire.

Together, Gypsy and Calvin travel halfway across the country, trying to stay one step ahead of their pursuers and dodging danger at every step. When they give in to their mutual attraction, neither realizes that it’s the one thing guaranteed to reveal their location to their biggest threat.

In the small Outback town of Backwater, human and alien greed will collide. Can their passion for each other be strong enough to survive the ordeal? Or will Gypsy’s destiny lead to an alien plan that could destroy everything?

Gypsy’s life is happy if uneventful. She owns a gift and flower shop and is gradually building up her business. Calvin bursts into her life to rescue her from weird humans with glowing green eyes who have invaded her shop. In one moment, her whole life changes.

On a frantic chase through parts of Australia, Gypsy slowly understands who she really is and the truth behind her adoption by Antonia Jones and her husband. Her real parents are a human father and an alien mother plus a few genes from her biological mother’s husband. Antonia is part of the Zodiac group who swore to hide Gypsy from the aliens. Calvin, a rescued member of the green eyed men group, fell in love with Gypsy when he first saw her photograph, but has no hopes she will return his feelings.

They have many encounters with Alpha’s green eyed men who have been ordered to capture Gypsy and kill the renegade Calvin. Despite all the odds they reach a small town in the Outback where they are met by members of the Zodiacs. Are they safe now? If not who will find them first? Alpha who wants to rule the world. Or Gypsy’s alien father who wants to annihilate the humans and take over the planet.

I have read many books with themes of the aliens of Roswell but this one is an definite possibility of the truth behind the UFO sightings. Gypsy’s secret abilities make her that little bit different. The book deals mainly with Gypsy and Calvin’s flight with Apha’s men chasing them. The truth behind Gypsy’s birth and adoption makes for a compelling read. Throughout the whole book I couldn’t fathom what would happen at the end.

Each problem Calvin and Gypsy meet is countered with a different solution. I imagine the author built the whole scenario before writing the story as everything fits together so well. In total, Shade of Grey concerns aliens in Australia, a hybrid human, an altered human and those who hold out the hand of friendship to help them. And through it all of course are the dangerous romantic feelings growing between Gypsy and Calvin. A good book for those who love a paranormal with that little bit of difference.

Posted by The Long and the Short of It Admin at 4:09 AM