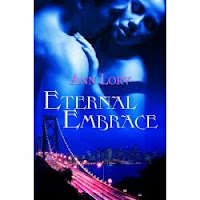 Dimitri Alexios lives alone in his San Francisco mansion, if one could call loathing what he is and hating his maker living. Until he beholds the mortal woman who appears on his doorstep. Her gentleness brings light to his darkness, and her innocence calls to him. Yet she knows nothing of his world, or the dangerous predator that constantly rages within him.

Museum curator Cassie Stephens, sent to catalog antiques at the Alexios estate, is surprised to discover Dimitri is anything but the old man she expected. He’s handsome and darkly mysterious, not the sort who’s usually attracted to her girl-next-door looks. Yet she’s ensnared by his irresistible charm.

Cassie’s passion has touched a heart he thought no longer capable of love. Now he must turn his strength to a deadly task: a battle to save the woman he loves from the maker who would love nothing more than to rip her away from him…

Take one vampire bent on an eternity of loneliness, add one female who dreams about finding a fairy tale love—just like the one’s she’s read in romance stories—and you get a passion that won’t be denied. Ms. Lory’s Eternal Embrace provides nothing less than a fervent attraction between two very unsuspecting characters.

Dimitri isn’t hard to love. He’s tall, dark, and absolutely gorgeous. Who wouldn’t fall for him? Of course, he’s determined to let all that sinister sexiness go to waste. What a shame. Sired by Gabriella, one merciless blood-sucking bitch from hell (no pun intended), Dimitri has spent over five-hundred years by himself, just as he feels he should be. His only friend and mentor, Jacques, taught him well—don’t love, don’t linger, don’t kill, and above all else, cover your tracks. So how did one petite woman with amazing purple eyes break through his hard shell?

Cassandra is a spunky, hard-working gal who’s determined to make it in the big city, despite being a small-town girl from the Midwest. A lover of art, she’s turned her passion into a career. She’d had dealings with plenty of big-wig art collectors, but Dimitri Alexios was definitely not what she expected. For one, he was far too young and his black slacks hugged him way too well. The man exuded a power and beauty unlike any she’d encountered before. How would she spend the next several weeks at his home, choosing and categorizing his art collection for display at the museum, when his stare seemed to caress her skin and make her feel things she’s never felt before?

I enjoyed reading Eternal Embrace. After the initial strong beginning, though, there were several chapters that seemed to drag. I have to admit I got a little frustrated at Dimitri’s constantly changing mood regarding his feelings for Cassandra, However, as the story progressed, the characters drew me in and made me want to read more. Ms. Lory does a good job of describing the setting and creating a clear visual of what her characters see and feel. A note of suggestion to make the story even stronger is to use a less passive description. Aside from that, I had little trouble imagining myself in Cassandra’s shoes as she entered Dimitri’s elaborate mansion and worked her way into his dark heart. Some point of view shifts and grammatical errors made parts of the story a little confusing and I found myself re-reading some paragraphs to figure out what I’d missed. Several scenes of foreplay had this reader on the verge of screaming with impatience—but all good things to those who wait, and it was definitely good! The author certainly does an excellent job of creating sexual tension between her characters.

Overall, I found Eternal Embrace to be a good story with an interesting plot. I just hope Ms. Lory picks up where she left off and writes a story about Jacques and Cassandra’s best friend. I sensed a growing attraction between them that has my heart screaming, “Yes! Yes!” Ignoring my own selfish wishes, I’ll wrap up this review by saying that if you a love dark broody vampire with an affinity for self-torment, and a clever, less-than-perfect woman with enough determination to open his eyes to love, then you better grab copy of Eternal Embrace. It promises to deliver all the above.

Posted by The Long and the Short of It Admin at 4:08 AM