Season of Miracles by Ed Goldberg 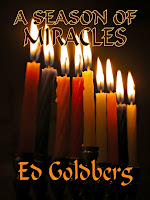 Sammy Itzkowitz was born on Christmas in a hole in the ground, under the home of a brave Polish family who hid his Jewish family from the Nazis.

After coming to Brooklyn at war's end, Sammy awaits with eager anticipation the arrival of the holidays: his birthday, Hanukkah and Christmas. He is dismayed to discover what he sees as indifference to the true meaning of Christmas, and ignorance of Hanukkah in America.

After a frustrating incident at school, he stages a shocking protest to make people focus on his favorite time of the year for the real reasons the holidays exist. He becomes a little boy on a moral crusade.

Only an intervention by his favorite Brooklyn Dodger hero can possibly save the day.

Samuel Itzkowitz was born on Christmas Day but for the first years of his life there were few celebrations. He and his family hid in a cellar for four years as the war went on above them. Release meant finding a new way of life in a new country. Samuel soaks up the ways of America and works hard at school absorbing all things around him.

Confusion enters Sammy’s mind when Christmas approaches. He is willing to embrace this festive occasion, but he can’t understand why non-Jewish people can’t do the same for Hanukka.

His acceptance only goes so far. When he believes something is wrong, he digs his heels in and refuses to budge, no matter what veiled threats are sent his way.

This poignant story is of a young Jewish boy who, until he is four years old, knew no other world but the cellar his family hid in. They emerge at the end of the war to find a whole new world waiting for them. Sammy is an intelligent child. He takes everything in his stride, willing to accept and blend in with the new life that stretches before him.

The author has woven a wonderful story about a small boy and allowed me to see exactly how the child viewed the world around him. There is no description of Sammy, but the words of the story showed me the sparkle in his eyes, his enjoyment with grass, flowers and trees. His interest in a totally strange new world. I saw him watching and enjoying his parents renewal of their religious observances. Sammy is a delightful child in a delightful story. There is a sort of moral to the story, but the true essence is the child’s journey and reactions to the world around him. Definitely a book worth reading for a person of any age.