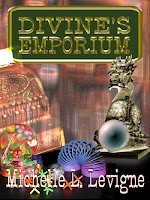 Maurice used his Fae magic to help the downtrodden and abused. But when he went too far, the Power-that-be decided he needed to learn humility, self-restraint, and mercy. They took away most of his magic, shrunk him down to 5 inches, and slapped wings on his back that no self-respecting Fae would be caught dead in. Then they exiled him to the Human realms, to work out his sentence helping Humans.

His destination: Divine's Emporium, a curiosity shop touched with magic, on the edge of the odd town of Neighborlee, Ohio.

His parole officer: Angela, the proprietress of Divine's Emporium, touched with magic and a shadowy past of her own.

His sentence: Help the Humans who come into Divine's to find answers, freedom, their own magic, and true love. Not necessarily in that order.

His problem: How does a five-inch-tall Fae, invisible to most Humans, win the heart of the ugly duckling who has caught his interest, his sympathy, and then his heart--when she can't see or hear him?

This book is magic! I don't mean the subject is magic - although this is true - but I found myself completely invested in the characters, cheering for the good guys and scowling at the bad ones. Ms. Levigne took me into her make believe world and sat me down in the front row to lose myself in the events passing by.

Fae creature Maurice has broken the rules and is given probation. Not so bad? Part of his punishment is to be shrunk to five inches tall and to add insult to injury they've given him wings that smell of candy floss! The only good thing about his punishment is Angela, his probation officer. Angela owns Divine's Emporium in the small town of Neighborlee. She sets him the task of helping others without hurting anyone.

Maurice learns quickly and many couples have him to thank for his sometimes unorthodox way of getting them together. He also loves the town and someone near to Angela becomes very special to him.

The people Maurice helps sometimes don't even know they have a problem. The minor characters touch not just the people at Divine's Emporium but also the other characters throughout the book. Poor Maurice had never been truly bad, he merely went a bit overboard in his previous endeavors.

Divine's Emporium is not set in any particular season. In fact it spans a whole year and more. Despite this I felt as if the Christmas spirit was on every page, infusing the whole book with goodwill and the spirit of giving. I could even taste Christmas when customers stood at the counter talking to Angela or her staff. At the end I felt Maurice had earned his freedom at least twice, but do his probation officer and the court agree?

Ms. Levigne has written a glorious book which left me with a feeling of goodwill and satisfaction. The last page indicates there may be more books in Neighborlee. I truly hope there are as I intend to read any future novels.