To Stand With Angels by Caitlynn J. Gabriel 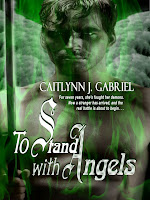 For seven years she’s fought her demons, but now a stranger has arrived and the real battle is about to begin…

In the wild Wyoming Territory, controlled by an evil cattle baron and his outlaw’s guns, one woman is hiding from her horrific crime and one man is seeking revenge. But when a deadly stranger comes to town, Evil takes on a terrifying new face. Now hiding is no longer an option and a revolver cannot kill the supernatural presence that is waiting in the dark city to claim the souls of those foolish enough to stand against it....

Will Rian’s past come back to haunt her?

Rian Keene wants nothing more than to live a quiet life in the wilderness of the Wyoming Territory. Living alone in such a remote area would frighten most people, but Rian is also the soul guardian of her young nephew, Kendall. Rian is a strong woman and is more than up to the challenge of raising a child on her own. Though Rian is a good woman, her past is marred by a dark secret. Every day Rian fears that someone will come looking for her and she will have to answer for actions.

Everything changes when a wounded stranger stumbles onto her property. Though Rian fears the discovery of her past, she takes pity on the man and nurses him back to health. Once he’s well enough to speak, she learns his name is Bradyn Preston and he was beaten nearly to death by Liam Briggs, an evil cattle baron, for supposedly having an affair with his woman. Rian suspects there is more to the story, but she fears that if she pries into Bradyn’s past, he will want to know more about her past in return.

Their tranquility is short lived. Liam Briggs has discovered that Bradyn is still alive and he’ll stop at nothing to see him dead. As Rian and Bradyn struggle to defend themselves against Liam’s hired guns, another danger lurks on the horizon. Rian has been having increasingly troubling dreams that warn her of an approaching evil more horrifying then she ever could have imagined. Will Rian and Bradyn be able to stand together against the darkness, or will they let their pasts tear them apart?

Rian and Bradyn are a well matched couple. Both are very strong willed and fiercely protective of those they love. Rian wasn’t looking for a man. She was managing just fine before Bradyn came along. However, once he enters her life, she realizes just how lonely she has been. She dares to hope that he will stay once he has healed. Bradyn never expected to find a good woman like Rian. His past is filled with more mistakes then he’d care to admit. He doesn’t feel that he deserves someone like Rian. If Rian and Bradyn are to have a future, they are going to have to let down their defenses.

I did have one issue with the story. The first half of To Stand With Angels is a wonderful story of two lonely souls finding each other. I loved watching Rian and Bradyn’s tough exteriors melt as they fell in love. The threat of Liam Briggs and his men makes the story even more interesting. However, the second half of the book is drastically different. So different, that it was almost like reading a completely different story. I knew that the supernatural would figure into the story eventually, but it plays a much larger role than the blurb for To Stand With Angels lets on. This normally wouldn’t be an issue as I love paranormal stories, but there was so much new information packed into the second half of the book that I didn’t feel that it fit well with the first half. Anyone reading To Stand With Angels should be prepared for this change.

Despite this issue, I thought To Stand With Angels was an interesting read. The romance is touching, and the second half of the book has enough supernatural elements and excitement to satisfy any fan of the paranormal genre.