Your Place or Mine by D. S. Craver 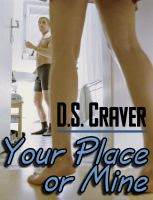 Sydney Smith decides it’s time to move out of her tiny apartment and become a home owner. Blake Smith, no relation and a real hottie, also wants to see the duplex. A mix-up has them viewing it together. They both love the house. There's also some sparks flying between the two of them, or is Sydney the only one feeling that way? A highly sensual story of fun, home-buying, and more...

‘Start as you mean to go on.’ Is a phrase I often heard during my childhood, but in Your Place or Mine? Ms. Craver does just that. She starts with an emotional bombshell for her heroine, Sydney Smith, and just keeps on going until the end of this short and tightly written short story.

The meeting, outside a duplex for sale, between Sydney and Blake Smith seems ordinary enough. After all, I bet this wouldn’t be the first two potential buyers piggy-backed on the same appointment. Combine that with immediate physical attraction and both the reader and Sydney are left wondering whether it is a case of emotional rebound after her former lover dumps her twenty-four hours before the meeting. While we learn all about Blake’s first marriage and are introduced to his seven-year-old son, I never quite fathomed out when Blake moved into town.

Ms. Craver pits common sense, caution and family responsibility against feisty impulsive actions tempered with logic and vulnerability. This juxtaposition creates plenty of intensity between her characters. Her sense of place is beautifully depicted as she moves from scene to scene. The story may be brief, but the wordsmith is awesome.

There are several secondary characters all create intense reader connections that range from loving respect to loving aggravation.

It may seems surprising to describe a story as ‘gentle’ when there are several spicy bedroom scenes. But that is just what this story is. So, if you want a quick read to fill in time, or just to curl up in front of the fire as the colder weather closes in, then this is a book for you.

Posted by The Long and the Short of It Admin at 4:09 AM