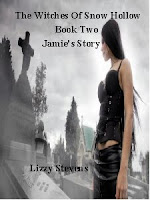 Jamie Addison returns to Snow Hollow to ask her sister, Jenna, for her blessing to marry the man she loves, Danny. When she gets there she finds out that she has been under a love spell the entire time and that Danny has also put a bind on her powers. Danny has been after the Addison house all along and plans to kill the sisters.

Jenna and her husband ,Jacob, vow to protect her. Jacob calls his cousin, Drake, over to protect her while the four of them plan their attack on Danny. The only way for Jamie to get her powers back is for them to kill the demon that put the spell on her.

Drake never leaves Jamie's side while it's his job to protect her. In the process of protecting her he falls in love with her. Jamie is torn between if her feelings for him are true of if it is a side effect of the spell that has been put on her.

Will Jamie's family be able to protect her or will the demon win?

Jamie’s in love with a demon. This second Addison sister has to fight for her inheritance and for Snow Hollow.

Ms. Stevens has done it again with this second book in the Witches of Snow Hollow series. Once more a strong heroine has to fight for what she believes in - not only to save herself, but also to save Snow Hollow.

Jamie must gain her eldest sister’s permission to marry a demon or she and her love will be banished to the darkest part of the underworld. It’s only when she meets with her sister that Jamie realizes she’s under a love spell.

I read the first in this series a few weeks ago. Once again I marvel at how Ms. Stevens can place so much in her story without making the book hundreds of pages long. Magic plays a strong part of Jamie’s Story, but romance and intrigue also have their place. These elements blend together to make a delightful tale of witches, demons and magic.

Jamie is a very likable young woman. She admits her mistakes and faces up to the consequences. There’s no denial of the facts presented to her, no moaning she’s been tricked. Instead she sets out to make things right. This is the main reason I liked this book, it has a strong heroine who accepts what life throws at her - plus of course I’m a sucker for magic themes.

Although the book did lag slightly at times, it immediately perked up again to keep me interested. A nice book which captured my imagination and took me into the realms of magic. Thank you Lizzy Stevens. I look forward to the third sister’s story.