The Cost of Love by Drue Allen 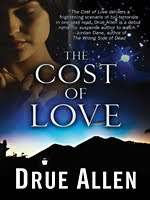 National security comes at a price.

Dean Dreiser learned that lesson long ago. Now domestic terrorists are testing a biological weapon in southern New Mexico, and Dean is forced to take a new partner--Dr. Lucinda Brown. Lucy is the leading expert in molecular biology, but she has no field experience. Separately they don’t stand a chance against what dominates the night skies of Roswell, New Mexico. Together they can do more than survive. They can do their jobs in spite of the scariest thing to crawl out of Roswell since 1947.

The terrorists are willing to kill thousands in order to trigger the fall of the two party system and usher in a new political dawn. Lucy tracks the genetic print of the weapon while Dean hunts the insurgents. As fate hurtles them across the desert toward a final showdown, Dean will be forced to decide between national security and Lucinda Brown. He knows which he has to choose and curses himself for hesitating. Dean Dreiser can’t afford The Cost of Love.

In New Mexico, the “sun continued its daily climb, oblivious to the plans of man”. Undercover agent Dean Dreiser watches as heat mirages shimmer across highway 380 like silent whispers of atrocities this haunting land has known. He knows more and worse atrocities are inevitable if he and his yet-to-meet partner cannot stop the use of bio-weapons that kill silently, invisibly, terrifyingly, and with unbelievable pain.

At the dreary looking Texaco station in Corona, he shakes hands with Commander Martin, receives orders, and learns his new partner is Dr. Lucinda Brown, the best in the business when it comes to bio-weapons.

Theirs is not a love-at-first-sight relationship but sparks do fly as Lucy and Dean hammer out a working relationship that mutates to SO much more. Dean’s first impression of the “skinny”, five foot five Dr. Lucinda Brown is that she is naïve, too young to be adequately trained, and beautiful. He firmly believes that “brains should come in a bigger, tougher package” to work in the field.

Lucy studies Dean as she makes her way toward him in the Albuquerque airport. His five foot eleven inch, one hundred eighty pound body looks scrawny, burned-out, hungover, and certainly older that its thirty-five years. He has the look of a spook that can slip away “like a shadow before the sun”.

The many characters fuel the suspense that builds from page one of The Cost of Love. Which characters are the “good guys” and which are the “bad guys” keep the reader fully engaged. Drue Allen has subtle foreshadowing that hints at the truth of each character. Be sure to watch for it.

Sally, the owner of E.T.’s bar with her shotgun and the “demeanor of a lone wolf”, reigns over her establishment, her employees, and customers with the attitude of a bad-tempered, but caring matriarch. Bubba and Billy, two “good ole boys”, probably will remind every reader of someone she has known that never grew up.

Drue Allen’s description of the area is realistically (well-researched or familiar territory). I recognized the Texaco station in Corona, the closed antique store near E.T.’s and the walkway where Lucy’s premonition shows her blood. Drue captures the aura, atmosphere, and attitude that came to be a part of the area after The Bomb testing at White Sands and the ensuing “out-of-this-world” tales.

The horror of what Lucy and Dean strive to stop makes The Cost of Love a compelling, scary story as well as a page-turner. Among the traitorous actions, Lucy and Dean offer up themselves to save masses of people yet they never fail to watch each other’s back.

“Dios estar con nosotros”, a prayer offered up when all seems hopeless, shows a facet of the characters not elaborated on but one that undergirds the selfless actions of many characters that work to save humanity. The climax shows the greatest of love, breath stopping, and adrenaline pumping.

Congratulations to Drue Allen for an exciting, well-crafted story.