Bound By Love by April Dawn 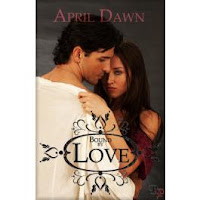 Chloe Adderley is on the run from an unwanted marriage and a father who is far more dangerous than she realizes.

Faced with an ultimatum that she can't accept: marry the man or starve to death in her room, running to her grandmother's house in Italy seems to be the only choice. She will pretend to be a governess, and hire a ship to take her there. It is a flawless plan. When she is robbed and knocked unconscious, however, she never suspects that the man who finds her will mistake her for a harlot.

Captain Darion Bannon is dismayed to discover that the unconscious woman he has taken aboard is actually an innocent lady. They find themselves falling in love, and Darion admits that he is a Privateer for the Sons of Liberty. When they are arrested for piracy, as the Crown calls it, they face a cruel prison and transportation to the Colonies, and Darion must fight to keep the woman he loves. Only their love can help them survive the cruel twists of fate.

Chloe Adderly’s father, with his dark secrets, deceits, greed, and grief becomes so cruel Chloe runs away thinking that she is too much a reminder of her mother and that is what makes her father mean to her. Unaware of how dangerous the docks are for a lone woman, she receives even more harsh treatment and regains consciousness on a pirate ship.

Darion Bannon, captain of the ship, is much more than a pirate, but he is good at his assignment and enjoys the dangerous work. Believing Chloe is a prostitute down on her luck; he saves her from ruffians and puts her in his cabin not realizing his life would never be the same again.

Chloe Adderly is a strong heroine that withstands adversity and heartbreak while remaining true to her self. She refuses to admit defeat against tremendous odds to reach her happy-ever-after.

Hannah and Robert, servants that help Chloe escape; Duncan, Jon, Wilkins on the ship; Amy in Newgate; and people at Ravenswing add depth and strong emotion to the amazing love story of Darion and Chloe. The loyalty they give to Chloe is a reflection of how she relates to others.

The horrors of Newgate added to all the other mistreatments seem to overshadow the love story. However, the sizzling love scenes and the truly faithful friends that stand by Chloe, even when Darion fails her, makes Bound By Love good reading.