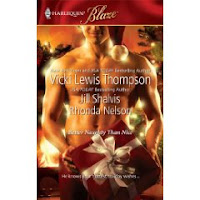 Meet St. Nick's delightfully devilish brother, Damon Claus. He's about to prove to three unsuspecting couples that being naughty is much, much nicer…

With Damon's sneaky help, Hayden Manchester and Riley Kinnard rekindle a long-running, very creative rivalry…that leaves them fighting over who's on top!

Her Secret Santa by Jill Shalvis

Workaholic Ally Dauer runs the local toy drive. Only when she discovers some very adult toys, firefighter Eddie Weston convinces her that the best gifts are meant to be shared….

Snug in His Bed by Rhonda Nelson

Viv Foster hates Christmas. Hank Bailey owns a Christmas tree farm. What could they possibly have in common? Sizzling sexual chemistry and, thanks to Damon, the opportunity to act on it. After all, it's the season of miracles…

Santa has a brother and according to these authors, he’s a pistol. But even then, it’s so nice.

Vicki Lewis Thompson adds a competitive angle to the story in No Mistletoe Required. The winner of the best decorated lawn gets a cruise—and Hayden wants it. But so does her friend and rival, Riley. Then again, he’d rather spend time with her on or off the big blue ocean. I like that the characters have spark, literally. The creative spirit and competition show their true colors. Add the pesky Damon, and you have a story that sizzles.

In the story by Jill Shalvis, Her Secret Santa, we find Damon intruding on the lives of Ally and Eddie. Instead of investigating a fire or a crime, she’s got a mind chock full of firefighter Eddie. And he’s not backing down from her challenges. Could it be that the playboy firefighter wants to settle down? What I like best about Ms. Shalvis’s work is that it’s real. These are people you could run into and know. The passion sizzling between them is so potent you can’t help but want them to be together.

Finally we have Snug in His Bed, by Rhonda Nelson. Ms. Nelson is another one of the authors on my TBR list. I love her alpha males and independent women. In this story, Viv got into hot water and has to serve out her sentence on a Christmas tree farm—Hank’s tree farm. She’s livid, not to mention that she hates Christmas. Enter Damon and things get interesting. I like that Hank wants to make her life miserable, but he can’t. I love a hero/heroine who can’t keep their hands off each other. Oh and then there’s his nickname for her—too funny. I love it.

If you want a sexy, steamy set of Christmas tales, guaranteed to make you blush and giggle, then you need to read Better Naughty Than Nice. You won’t regret it. I give this collection 5 books.