The Christmas Secret by Donna VanLiere 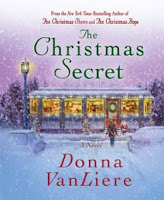 When a struggling young single mother saves the life of an elderly woman, she sets into motion a series of events that will test her strength, loyalty, and determination, all the while setting her on the path to finding true love. Christine Eisley is the mother of seven-year-old Zach and five-year-old Haley. Her ex-husband provides little, if any, child support and makes life difficult for Christine by using the children as pawns. She works long hours as a waitress to make ends meet, but her job is in jeopardy because she’s often late to work due to the unreliable teenaged sitters she’s forced to use. When Christine saves the life of a woman who works in Wilson’s department store, the owner of Wilson’s wants to find her, to thank her, but Christine has disappeared, losing another job once again. He sets his grandson, Jason, to the task of finding the mysterious “Christy.” Jason, an accountant by trade who has lost his job to downsizing, thinks he is “above” working at Wilson’s. Soon, he discovers that this new task gives him more than he bargains for.The Christmas Secret is a novel for anyone who wants to see how love is a gift that keeps giving back; that hope is a treasure that never runs dry, and that faith is a miracle that is reborn with each new day.

With frayed faith, hope that waits, and love’s many layers, THE CHRISTMAS SECRET touches a multitude of emotions that enlighten and enliven one’s perception of the Christmas message that the joy of giving and the blessedness of receiving enriches all that are involved.

While this story is about how Christine and Jason make their way from misery to marriage, it is so much more. It is humorous, serious, poignant, and compelling in its telling of how “love thy neighbor” is alive and well.

Christine’s faith is frayed to the point she tears up her letter to God under the Christmas tree. It seems the harder she tries the more her circumstances deteriorate. However, when the door on her job closes at Patterson’s and the door at Betty’s opens, Christine finds much more than just a job. In this homey, busy place, she finds friends that give her a “hand up” not a handout. These caring people rally around her in their own way of loving their neighbor. Two of these people are Gloria and Miriam, delightful characters that bring a sense of adventure to the most mundane act of kindness. They do a number on Brad, Christine’s ex that makes one want to give them a whooping high five. They are super little old ladies!

Christine’s five-year-old Haley, with her unique sense of fashion, her dreams of flying, her reluctance to do the “so hard” kindergarten homework, and her unfailing belief in her big brother Zach brightens the story even when conditions seem hopeless.

Seven-year-old Zach who struggles with a sense of responsibility beyond his years and his awareness of his mother’s desperation makes one want to hug him close and give him the joy of just being the little boy that is evident under the grownup veneer—the little boy that makes up “bat lady” stories and wants little boy toys for Christmas.

Jason Haybert comes on the scene as a spoiled, college-educated twenty-four-year-old who is self absorbed, with no concern for others. As he changes from a spoiled snob to a caring, loving, and useful person, one sees the handiwork of his long-suffering grandfather Marshall. Marshall is a man who knows what LOVE is all about. He helps Jason until Jason realizes just what a love is that makes one “breathless and humble at the beauty of it”.

THE CHRISTMAS SECRET reveals the joys in helping each other without judging and how one can have “that childhood sense of wonderment” that is so much a part of Christmas.

Donna VanLiere’s THE CHRISTMAS SECRET is a love story and a Christmas story to be enjoyed year after year. It is a KEEPER.

Posted by Long and Short Reviews at 4:09 AM