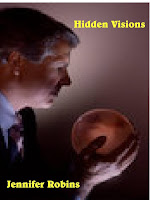 Psychometry is a psychic power which allows one to divine from holding or touching items. Visions of the past, present and some times the future are laid out before them.

Kevin has this power but hesitates to use it. He meets Candace and falls in love with her just before he starts his career as a policeman with hope of becoming a detective in homicide—his gift the motivating factor. When it comes to a crime against Candace, he must use his gift to save her from great harm or even death by the hand of a killer who wants revenge against Kevin.

Hidden Visions is a charming short story about a man who has the incredible psychic power of psychometry. The talent of psychometry allows a person who has this gift to receive visions of the past, present and future when holding or touching a physical item. Anyone who has seen the show “Dead Zone” will be familiar with this type of psychic gift.

The hero of the story, a young man named Kevin, has this gift and decides to become a policeman, knowing that he could put his abilities to use and be an effective crime-fighter.

The idea is quite intriguing and drew me to this story in the first place, as I expected some interesting adventures to unfold. It was fun to read and watch as the likeable Kevin went on the job and used his gift. He meets a woman named Candace and falls in love.

Because of putting away a murderer with the use of his special ability, Kevin finds himself in a troubling situation. The criminal escapes and kidnaps Candace.

The plot of this tale is interesting, and the characters charming. I liked the idea of the story. My problem was in its execution. Point of view is everywhere, transitions are missing throughout, and it is distancing to the reader with its telling and not showing presentation, very “on the surface.”

However, it is a quick read, and if you do not mind technical issues, you’ll probably enjoy it and learn a little about an interesting phenomenon.

Posted by Long and Short Reviews at 4:10 AM