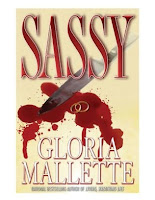 A successful romance novelist, Sassy is a woman looking to fulfill her own fantasy. When the man of her dreams step right out of the pages of her latest novel, Butterfly, Sassy falls madly in love with him. But what evil lies behind Norris Yoshito's beautiful eyes and sexy smile? Is the man of Sassy's dream a serial killer of women who made the mistake of trusting him just as Sassy did? Is Sassy's marriage a horrible mistake that will lead to her own death? You'll find out and you will be stunned.

None of the characters in SASSY came from “Leave It to Beaver” homes. They each survive difficult childhood situations that influence the way they deal with life-changing issues in adulthood.

Sassy Davenport, a successful romance novel writer, is comfortable with her biracial ethnicity and confident in her ability to take care of herself. Loyal to those she loves, she supports even though she may not always approve. Her life changes the day she meets Norris Wilson, a man like the heroes in her novels. He makes her tingle with anticipation in a sexual response to him and bubble with joy as he sincerely appreciates her as a professional, talented person.

Norris Wilson, a Japanese-American, had been an outcast with his single mother in Japan. After her death, life had been even worse until he came to America to be with his father. Even though now a highly successful architect, he finds himself a suspect in multiple murders. His complex character helps make this novel compelling. His determination and steadfastness make him a fascinating hero.

SASSY’s secondary characters are strong and realistic. Their flaws and their strengths help propel the suspense along at breathtaking speed at times. Life styles may not be the norm but they grab the reader’s attention and imagination as the story becomes entangled in a cruel web that threatens both Norris and Sassy’s lives. The antagonists are incredible in their plans making them frightening adversaries.

Gloria Mallette does a masterful job of weaving the web that entangles the main characters then unraveling it with such subtlety the reader is on pin and needles at times. SASSY ranges from a simple book signing to vicious murders. It is a gripping tale.