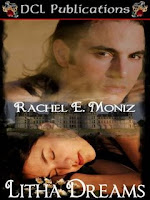 The rebellious Lady Morgan Mackenzie has been feeling pushed into finding a husband that her mother deems suitable. Morgan, however, has other ideas about the man she should choose. Laird Rowan Buchanan is without a wife and his Uncle James will not tolerate the Buchanans not having a strong heir. A common dream, a colorful gypsy and a concerned cousin all come together to bring these two soul mates together and make their Summer Solstice a very memorable night.

Morgan MacKenzie, a mere eighteen years old, is a step this side of spinsterhood according to her annoying mother, Lady Ellen. A constant parade of suiters are thrust upon her each one older, balder, and less desirable then the previous. Morgan will choose a husband or one will be chosen for her states the dower shrewish Mistress of Lochaber Castle.

Rowan Buchanan, Lord and master of his own keep, Culloch Castle, is in need of a wife. Time is passing and he just can’t seem to find a woman that moves him. They all seem to be gold diggers and boring. He wants a free-spirited woman that has an adventurous nature.

Morgan and Rowan share many things in common unwittingly but one is the dream of a soul mate that haunts them each night and drives them to seek out this person each has given themselves to so completely yet each wonders if the other exists.

The common thread in this tale is Morgan’s hand-maid and friend, Ruadh whose aunt is a Gypsy palm and Tarot card reader. Morgan agrees to join Ruadh at the Pagan celebration of Litha on the night of the Summer Solstice.

As coincidence would have it, Rowan is a friend of the Gypsies and is also joining in the celebration. Will dream lovers cross paths lending magic to the air.

You can’t help but root for feisty Morgan in this historical story of magic and mayhem. Ellen, Morgan’s mother is bound and determined to see her daughter married off and safe to someone, anyone who is worthy of a full purse and secure lifestyle. Morgan wants the man in her dreams that Ruadh, her friend, advises is fated to her. She only must find him. While Ellen plans and connives for a husband for Morgan, her cousin, Aleister fears Morgan will lose her free spirit and individuality. He supports her in her rebellious nature and aids her in her wayward plans and is also an ally to Rowan when he sets his sites on Morgan. Aleister also loves Ruadh and stands to be opposed in his choice of mate as he stands to inherit Lordship of Castle Lochaber and when Morgan’s father departs his earthly presence.

Ms. Moniz weaves a magical tale of love and keeping with one’s desires and destiny. Morgan is willful and steadfast as is Rowan. I read this short in one sitting and thoroughly enjoyed it. A clean, crisp, whimsical read, I strongly suggest delving into this one. You will not be disappointed.

Posted by Long and Short Reviews at 3:59 AM