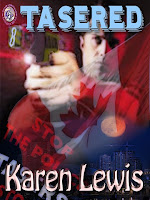 A bystander has recorded the incident on video. He sells it to the media. Capturing the action from one angle only, it does not show the man reaching into his pocket for the knife. It is assumed, therefore, that the police acted brutally and without provocation. Public condemnation is fierce and international. Deron and Curtis are branded murderers. They are threatened and attacked.

The idea for TASERED came from a real incident. However, the characters and situations are entirely fictional.

A murder mystery thriller that will keep you guessing! Chock full of twists, turns and side stories that you won’t be able to quit until you’re on the last page!

Deron James, a corporal in the Vancouver Police Department, simply cannot catch a break. While following procedure during a disturbance call, he uses his taser on an out of control subject, only to later have him die from the taser shot. From there, the world spins out of control as all of Canada calls for Deron’s blood.

Deron, however, is a good cop and is determined to clear his name. He’s a good man as well, and he has his doubts and insecurities. He, along with his married partner, Curtis, makes a good duo. They’re alike enough to be friends, but different enough to keep things interesting.

While investigating Manuel Vega, the disgruntled tourist killed by his taser, Deron travels to Mexico to unearth the truth. In his attempt to dig up information, he encounters the most helpful – and annoying – woman possible: Denise. Denise is a great character, full of life, energy, and a snappy comeback. She works well to offset Deron’s more serious side.

Tasered is a fascinating and enjoyable story, well-suited to a time in our lives when the cops are expected to do their jobs, stay alive, but not even accidentally hurt the bad guys. This is the story of how one cop copes with the expectations of his job and the public.