The Nude by Dorothy McFalls 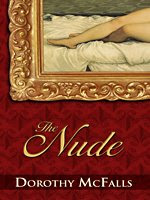 Love and danger collide in this tender Regency romance.

All of London is enthralled by the mysterious Dionysus's latest masterpiece, a sensual woman reclining on an ornate settee, entitled The Nude.

Elsbeth, Countess Mercer, recognizes Dionysus's work. This isn't the first time he's caused havoc in her life. This time, though, his painting has put her at the center of a vicious scandal, for the figure in the painting looks shockingly like her . . . nude. Before he can hurt her again, she sets out to find the artist and prove her own innocence.

Nigel has several problems of his own on his hands. A smuggling ring is using his Dorset estate's shoreline. Someone is trying to kill him. And now a feisty widow is coming close to discovering Dionysus's identity. Seducing the lady might be the swiftest course for diverting her attentions.

He doesn't realize how such an affair would affect her heart . . . or his own.


In 1814, The Nude, a portrait by the renowned Dionysus, sets London Society into a tizzy with gossip.

God-fearing, chaste, and faithful widow Elsbeth Mercer along with Nigel, Marques of Edgeware, a bachelor and recluse, who says Dionysus is his responsibility, find themselves in a quagmire of trouble as they try to right wrongs that started years ago.

Dorothy McFalls gives us two tragic characters in Elsbeth and Nigel, both of whom long for peace.

Nigel, sure he will die before he is thirty just like his grandfather and his father, deals with the dark side of his personality in secret but suffers from loneliness and despair. As he tries to salvage the reputation of Elsbeth—a reputation sullied by others not by her; he is overrun by betrayals himself and narrowly escapes murder attempts on his life.

Elsbeth, finally free from a six-year abusive marriage, finds her peaceful life at her uncle’s home thrown into chaos at the unveiling of The Nude. She has no idea how the artist did the painting without her posing for it, but her position as chaperone for her cousins Lauretta and Olivia has turned London Society against them as well as her. She vows to find the identity of Dionysus who has plagued her life for years in a “most unique” way. “A steely flower...” Elsbeth “...could have been Athena the warrior returned lithe as a deer, strong as a lioness.” Her determination to gain some reasonable control over her own life makes her an enthralling character.

The secondary characters, made up of nobles and commoners, represent many levels of Regency life styles as well as many levels of morals regardless of their station in life. They are an intriguing collection of vice and virtue.

Debauchery, greed, cruelty, gossip, and jealousy all have to be dealt with before PEACE comes for Nigel and Elsbeth. Relatives, friends, foes, and hangers-on all make the resolution of problems difficult. However, the exquisite love scenes take one’s breath away.