The Valentine Edition by Robin Shope 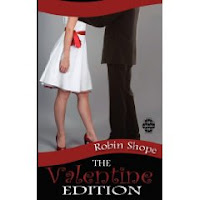 The last place in the world Jodi Williams wanted to live was Turtle Creek, Wisconsin, but when her stepdad refused to put in a good word for her at the Chicago paper, she had no other choice than to accept the first job offer that came her way. Josh Thomas was Turtle Creek's veterinarian, but he also happened to be single and quite handsome. His life was pretty peaceful until a pretty, young stranger came to his clinic with a dog that had been hit by a car. While his first reaction was to care for the injured animal, he couldn't help a few glances at this unique young woman. That day was one of quite a few new beginnings. Jodi came to the aid of an injured animal, earning her the respect of a handsome man, she started a new job as a reporter for The Turtle Creek Newspaper, and she gained the wrath of the vet's receptionist. Della had her sights set on Joshua, and she wasn't about to let anyone come between her and the man of her dreams.

In this charming tale, an enterprising young reporter and a handsome veterinarian find love, but face some difficulties as they work toward their happily-ever-after.

Jodi Williams reluctantly moves to Turtle Creek to start her job at the local paper, but soon is glad she did when she meets veterinarian Josh Thomas. When a small dog is hit by a car, Jodi comes to its rescue with the aid of Josh and soon the pair find themselves spending more time together and growing closer. But the two face some trouble in the form of Della, Josh’s assistant who just happens to have an obsession with him.

This was a very sweet story and I really enjoyed the relationship Jodi shared with Josh. Both of these characters are so nice and likeable that you want the best for them. They were perfect for one another and they almost seem too good to be true or real. But Jodi has some trust issues thanks to an incident from her past which added some realness to her character. As for Josh, he is an all-around nice guy who is determined to earn Jodi’s trust and love and work through the barriers that she has put in place. However, Jodi’s doubts and insecurities could hamper her relationship with Josh.

In addition to a strong lead couple, there are also several interesting secondary characters from Della, Josh’s obsessive assistant to Jodi’s co-workers at the newspaper, who are like a little family. Each character brought something different to the story and I loved how they fit in the story. Many of the characters go through quite a transformation, which was quite interesting to see and really fit the tone of the story.

The Valentine Edition is a sweet story with characters you can’t help but like.