Review: The Legend and The Laird 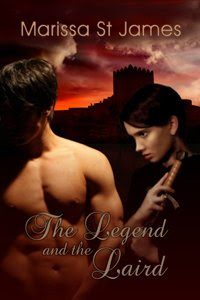 The Legend and The Laird
by Marissa St. James

Her need for revenge outweighs her duty to her betrothed and his clan. Raven McDraoigh and her mentor have been riding through the Scottish highlands for several years, searching for clues to the man responsible for her mother’s murder and the massacre of her clan. When she runs out of places to search, she can only turn to her betrothed, Jamie McKay, laird of Clan McKay. But Jamie has other ideas in mind.
For the last ten years, Jamie believed his wife was dead, murdered along with her mother and clan. Imagine his surprise when she turns up on his doorstep. A battle of wits is about to take place. Jamie wants a wife, a partner to lead his clan. She won’t give in until she’s fulfilled her vow.

When the McDraoigh Legend stands against the Laird of Clan McKay, there’s sure to be fireworks.

The Legend, the Draoidh, the Conscious of Scotland, protected by the mist and magic, lived in peace for 200 years before evil found its way through the mist. The primary story Marissa St. James weaves begins when this evil creates havoc at Dun Sgaith.

As the story begins, the reader meets Meredith and Aiden who travel back in time to help Raven, Meredith’s relative of long ago. Time travel and shape shifting are subtle, but strong threads in this historic tale that creates a picture rivaling the most intriguing tapestry hanging on the walls of any Scottish castle.

Meredith and Aiden fade to the background as Raven’s story begins. They protect and assist the ten-year-old Raven when her mother and clan are killed at Sun Sgaith.

Raven, the Legend, becomes a warrior and a wanderer as she seeks justice. Even though, she was promised to Jamie MacKay when she was only three years old, she waits ten years after her mother’s death before she makes an appearance at his castle. Even then, she does not come to be his wife in the full sense of the word but to use him in her continuing search for those who had dared to attack and kill her mother and clan when her mother had refused to hand over Raven.

The secondary characters woven into the tapestry of this tale come alive as they each play vital roles in the unfolding events in Raven’s life. The reader sees the maneuvering and manipulating that goes on at court as each person jousts for a position of favor in the king’s regard. The distrust that each Scottish clan has for the other clans is also revealed to the reader as the inability of the clans to come together in a common cause to defeat the English brings about battles, raids and, in time, the downfall of Scotland.

The infighting among the clans is the conflict that most influences Raven’s story and furnishes the most subtle and intriguing part of THE LEGEND AND THE LAIRD. Marissa St. James does a masterful job of making the time travel work to the story’s advantage while never taking the reader far from the magic of the misty environment in Scotland.

Ah, lads and lasses, besides working out a happy-ever-after for generation upon generation of The Draoidh, Marissa St. James makes this reader proud to have a hint of Scottish blood in her veins. This one is GOOD reading!